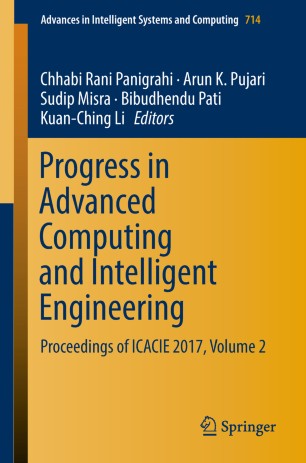 Part of the Advances in Intelligent Systems and Computing book series (AISC, volume 714)

This book features high-quality research papers presented at the International Conference on Advanced Computing and Intelligent Engineering (ICACIE 2017). It includes sections describing technical advances in the fields of advanced computing and intelligent engineering, which are based on the presented articles. Intended for postgraduate students and researchers working in the discipline of computer science and engineering, the proceedings also appeal to researchers in the domain of electronics as it covers hardware technologies and future communication technologies.

Dr. Chhabi Rani Panigrahi is Assistant Professor in the Department of Computer Science at Rama Devi Women’s University, Bhubaneswar, India. She completed her Ph.D. in the Department of Computer Science and Engineering, Indian Institute of Technology Kharagpur, India. Her areas of research interests include Software Testing and Mobile Cloud Computing. he holds 17 years of teaching and research experience. She has published several international journals and conference papers. She is a Life Member of Indian Society for Technical Education (ISTE) and Member of IEEE and Computer Society of India (CSI). She also served as Guest Editor of IJCNDS and IJCSE journals. She was the Organizing Chair of ICACIE 2016, ICACIE 2017, and WiE Chair of IEEE ANTS 2017.

Prof. Arun K. Pujari is Faculty and Dean of the School of Computer and Information Sciences at the University of Hyderabad (UoH) and has been appointed as the Vice-Chancellor of the Central University of Rajasthan. He has earlier served as the Vice-Chancellor of Sambalpur University, Odisha, in 2008. He got his Ph.D. from IIT Kanpur in 1980. He has more than 15 years of experience as Dean and Head of the Department. He has served as a member of high-level bodies such as UGC, DST, DRDO, ISRO, and AICTE. He has over 100 publications to his credit and has wide exposure to national and international arenas. His two published books are Data Mining Techniques and Database Management System.

Dr. Sudip Misra is Professor in the Department of Computer Science and Engineering at the Indian Institute of Technology Kharagpur. Prior to this, he was associated with Cornell University, USA; Yale University, USA; Nortel Networks, Canada; and the Government of Ontario, Canada. He received his Ph.D. in Computer Science from Carleton University, Ottawa, Canada. He has several years of experience working in the academia, government, and the private sectors. His current research interests include Wireless Sensor Networks, Internet of Things (IoT), Software Defined Networks, Cloud Computing, Big Data Networking, Computer Networks. He is the author of over 260 scholarly research papers, including more than 150 reputed journal papers. He has published nine books in the areas of advanced computer networks.

Dr. Bibudhendu Pati is Associate Professor Science at Rama Devi Women’s University, Bhubaneswar, India. He has around 21 years of experience in teaching and research. His areas of research interests include Wireless Sensor Networks, Cloud Computing, Big Data, Internet of Things, and Advanced Network Technologies. He completed his Ph.D. from IIT Kharagpur. He is a Life Member of Indian Society for Technical Education, Computer Society of India and Senior Member of IEEE. He has got several papers published in reputed journals, conference proceedings, and books of international repute. He also served as Guest Editor of IJCNDS and IJCSE journals. He was the General Chair of ICACIE 2016, and IEEE ANTS 2017 international conference.

Prof. Kuan-Ching Li is a Professor of Computer Science and Engineering at Providence University, Taiwan. He received guest and distinguished chair professorships from universities in China and other countries, and a recipient of awards and funding support from several agencies and industrial companies. He has been actively involved in many conferences and workshops in program/general/steering conference chairman positions and has organized numerous conferences related to high-performance computing and computational science and engineering. Besides the publication of research papers, he is co-author/co-editor of more than 15 technical professional books published by CRC Press, Springer, McGraw-Hill and IGI Global. He is a Fellow of IET, a life member of TACC, a senior member of the IEEE and a member of the AAAS, and Editor-in-Chief of International Journal of Computational Science and Engineering (IJCSE), International Journal of Embedded Systems (IJES), and International Journal of High-Performance Computing and Networking (IJHPCN), published by Inderscience. His research interests include GPU/many-core computing, Big Data and Cloud.