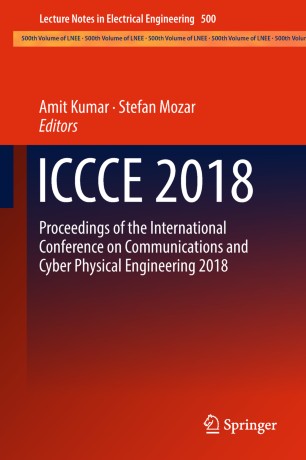 This book comprises selected articles from the International Communications Conference (ICC) 2018 held in Hyderabad, India in 2018. It offers in-depth information on the latest developments in voice-, data-, image- and multimedia processing research and applications, and includes contributions from both academia and industry.

Dr. Amit Kumar is CEO and CSO of BioAxis DNA Research Centre (BDRC) Pvt Ltd. He served as Vice Chair of the IEEE India Council’s Technical and Professional activities and convener of the IEEE Region 10 Entrepreneurship, Innovation and Skill Development ad hoc committee of. He was a member of the IEEE’s Gaining Global Perspectives on Conferences and Events as hoc committee. Dr Kumar is a professor at SJB Research Foundation Bangalore and editor of Springer Briefs on Forensic and Medical Bioinformatics (FMB). Amit was secretary of the IEEE Hyderabad Section from 2010–2012, treasurer of IEEE Hyderabad section from 2012–2015, chairman of IEEE Computational Intelligence Society, IEEE Hyderabad Section from 2010–2013. He is a member of the respected Neural Networks Technical Committee (NNTC) of the Institute of Electrical and Electronic Engineers’ Computational Intelligence Society (CIS).
Stefan obtained his engineering degrees from the University of New South Wales in Sydney, Australia, and his MBA from the University of Technology Sydney. He is a Fellow of the IEEE, and of the Institution of Engineers, Australia. He is a Chartered Professional Engineer and has extensive experience in industry and academia. He has held senior leadership roles in various technology companies, and has taught at a number of Australian, Asian, and British Universities. His work has resulted in inventions, patents, and publications. He has lived and worked in Australia, China, Hong Kong, Singapore and worked on projects in India, Indonesia, Malaysia, Thailand, and Vietnam and has made contributions to the advancement of the IEEE in R-10 and globally. He is the editor of the 6th edition of the McGraw-Hill Electronics Engineering Handbook released in 2017.