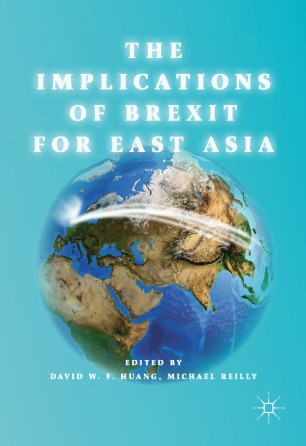 The Implications of Brexit for East Asia

This book is the first comprehensive exploration of the impact Brexit might have on both Britain’s and the EU’s role in a rising East Asia. From the internationalization of the renminbi to Hong Kong's fraught political status quo, and from former British colonies exploring their place in the world to America's place in East Asia in the Trump era, the EU has an influential role in Asia today. However, much of this derives from Britain’s role and interests, even as Asian models were explicitly cited as models for post-Brexit Britain, particularly the Singaporean model. This book will be of value to scholars, policymakers, and journalists seeking to understand what role the EU and Britain will play in the Asian century.
David W. F. Huang is currently an associate research fellow of the Institute of European and American Studies, Academia Sinica. He also holds a joint appointment as a full-time Associate Professor in the Graduate Institute of National Development, National Taiwan University. From 2004 to 2008, he was transferred to the Taiwan government to serve in the Mainland Affairs Council (MAC) and the Taipei Economic and Cultural Representative Office (TECRO) in the United States. His current research focuses on comparative regionalism, EU and US politics.
Michael Reilly is a senior fellow of the Taiwan Studies Program at Nottingham University (non-resident). His research interest is the EU’s relations with Taiwan, specifically prospects and opportunities for developing these against the continuing rise of China. A former career diplomat, he spent over 30 years working for the UK Foreign & Commonwealth Office, principally handling UK policy towards East and South East Asia.