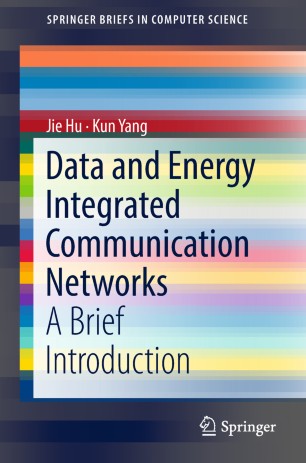 The book discusses data and energy integrated communication networking technologies, including the latest research contributions in this promising area. It firstly provides an overview of data and energy integrated communication networks (DEINs) and introduces the key techniques for enabling integrated wireless energy transfer (WET) and wireless information transfer (WIT) in the radio frequency (RF) band. It then describes the ubiquitous architecture of DEINs and demonstrates the typical DEIN system and investigates the core issues in both the physical layer and the medium-access-control (MAC) layer in order to coordinate both the WIT and WET in the same RF band. Lastly, the book addresses a number of emerging research topics in the field of DEINs. It promotes joint efforts from both academia and industry to push DEIN a step closer to practical implementation. It is also a valuable resource for students interested in studying cutting-edge techniques in this field.

Prof. Kun Yang received his PhD from the Department of Electronic & Electrical Engineering of University College London (UCL), UK, and his MSc and BSc from the Computer Science Department of Jilin University, China. He is currently a Chair Professor at the School of Computer Science & Electronic Engineering, University of Essex, and leads the Network Convergence Laboratory (NCL), UK. He is also an affiliated professor at UESTC, China. Before joining the University of Essex at 2003, he worked on several European Union (EU) research projects for several years at UCL. His main research interests include wireless networks and communications, data and energy integrated networks, and computation-communication cooperation. He manages research projects funded by various sources such as the UK EPSRC, EU FP7/H2020 and industry. He has published over 100 journal articles, and serves on the editorial boards of both IEEE and non-IEEE journals.