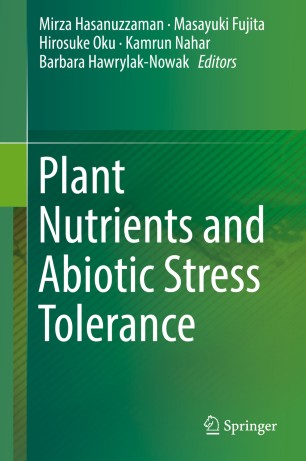 Today, plant nutrients are not only considered as food for plants, but also as regulators of numerous physiological processes including stress tolerance. They also interact with a number of biological molecules and signaling cascades. Although research work and review articles on the role of plant nutrients in abiotic stress tolerance have been published in a range of journals, annual reviews and book chapters, to date there has been no comprehensive book on this topic.

As such, this timely book is a valuable resource for a wide audience, including plant scientists, agronomists, soil scientists, botanists, molecular biologists and environmental scientists.

Mirza Hasanuzzaman is a Professor of Agronomy at Sher-e-Bangla Agricultural University, Dhaka, Bangladesh. In 2012, he received his PhD on ‘Plant Stress Physiology and Antioxidant Metabolism’ from the United Graduate School of Agricultural Sciences, Ehime University, Japan with Japanese Government (MEXT) Scholarship. Later, he completed his postdoctoral research in Center of Molecular Biosciences (COMB), University of the Ryukyus, Okinawa, Japan with ‘Japan Society for the Promotion of Science (JSPS)’ postdoctoral fellowship. Subsequently, he joined as Adjunct Senior Researcher at the University of Tasmania with Australian Government’s Endeavour Research Fellowship. He joined as a Lecturer in the Department of Agronomy, Sher-e-Bangla Agricultural University in June 2006. He was promoted to Assistant Professor, Associate Professor and Professor in June 2008, June 2013, and June 2017, respectively. Prof. Hasanuzzaman has been devoting himself in research in the field of Crop Science, especially focused on Environmental Stress Physiology since 2004. He has been performing as team leader/principal investigator of different projects funded by World Bank, FAO, University Grants Commission of Bangladesh, Ministry of Science and Technology (Bangladesh) and so on.

Prof. Hasanuzzaman published over 100 articles in peer-reviewed journals and books. He has edited 2 books and written 35 book chapters on important aspects of plant physiology, plant stress responses, and environmental problems in relation to plant species. These books were published by the internationally renowned publishers (Springer, Elsevier, CRC Press, Wiley, etc.). His publications got over 2000 citations with h-index: 23 (according to Scopus). Prof. Mirza Hasanuzzaman is a research supervisor of undergraduate and graduate students and supervised 20 M.S. students so far. He is Editor and Reviewer of more than 50 peer reviewed international journals and recipient of ‘Publons Peer Review Award 2017’. Dr. Hasanuzzaman is active member of about 40 professional societies and acting as Publication Secretary of Bangladesh Society of Agronomy. He has been honored by different authorities due to his outstanding performance in different fields like research and education. He received the World Academy of Science (TWAS) Young Scientist Award 2014. He attended and presented 25 papers and posters in national and international conferences in different countries (USA, UK, Germany, Australia, Japan, Austria, Sweden, Russia, etc.).

Masayuki Fujita is a Professor in the Laboratory of Plant Stress Responses, Faculty of Agriculture, Kagawa University, Kagawa, Japan. He received his B.Sc. in Chemistry from Shizuoka University, Shizuoka, and M.Agr. and Ph.D. in plant biochemistry from Nagoya University, Nagoya, Japan. His research interests include physiological, biochemical, and molecular biological responses based on secondary metabolism in plants under various abiotic and biotic stresses; phytoalexin, cytochrome P450, glutathione S-transferase, and phytochelatin; and redox reaction and antioxidants. In the last decade his works were focused on oxidative stress and antioxidant defense in plants under environmental stress. His group investigates the role of different exogenous protectants in enhancing antioxidant defense and methylglyoxal detoxification systems in plants. He has supervised 4 M.S. students and 13 PhD students as main supervisor. He has about 150 publications in journal and books and has edited 4 books.

Kamrun Nahar is an Associate Professor, Department of Agricultural Botany at Sher-e-Bangla Agricultural University, Dhaka, Bangladesh. She obtained B.Sc.Ag. (Hons.) and M.S. in Agricultural Botany from Sher-e-Bangla Agricultural University, Dhaka, Bangladesh. She perused her second M.S. degree in 2013 from Kagawa University, Japan. She also received her PhD Degree on ‘Environmental Stress Physiology of Plants’ in 2016 from the United Graduate School of Agricultural Sciences, Ehime University, Japan with Japanese Government (MEXT) Scholarship. She started her career as a Lecturer in the Department of Agricultural Botany, Sher-e-Bangla Agricultural University in February 2010, was promoted to Assistant Professor in 2012 and to Associate Professor in 2017. Dr. Nahar has been involved in research with field crops emphasizing stress physiology since 2006. She has completed several research work and also continuing research project funded by Sher-e-Bangla Agricultural University Research System and Ministry of Science and Technology (Bangladesh). She is supervising M.S. students. Dr. Nahar published number of articles in peer-reviewed journals and books of reputed publishers. She has published 50 articles and chapters related to plant physiology and environmental stresses with Springer, Elsevier, CRC Press, Wiley, etc. Her publications reached about 2000 citations with h-index: 22 (according to Scopus). She is involved in editorial activities and reviewer of international journals. She is active member of about 20 professional societies. Dr. Nahar attended different international conferences and presented 10 papers, and posters in national and international conferences in different countries (USA, Australia, Japan, Austria, Russia, China, etc.).

Barbara Hawrylak-Nowak has written over 40 refereed publications, including 25 papers published in journals indexed in JCR. Her research results were presented in over 35 conference reports at national and international scientific conferences. Her work has contributed to the knowledge of biological activity of trace elements in plants, especially grown under stressful conditions. She actively collaborates with several researchers/research groups in Poland and abroad.

Hirosuke Oku is a Professor in the Center of Molecular Biosciences at the Tropical Biosphere Research Center in University of the Ryukyus, Okinawa, Japan. He obtained Bachelor of Science in Agriculture from University of the Ryukyus in 1980. He received his PhD in Biochemistry from Kyushu University, Japan in 1985. In the same year he started his career as Assistant Professor in the Faculty of Agriculture, University of the Ryukyus. He became Professor in 2009. He received several prestigious awards and medals including the Encouragement Award of Okinawa Research (1993) and Encouragement Award of Japanese Society of Nutrition and Food Science (1996). Prof. Oku is the group leader of the Molecular Biotechnology Group of the Center of Center of Molecular Biosciences at University of the Ryukyus, His research works focused on the Lipid Biochemistry; molecular aspects of phytomedicine; secondary metabolites biosynthesis and abiotic stress tolerance of the tropical forest trees. He has about ten PhD students and over 20 M.S. students. Prof. Oku has over 50 peer-reviewed publications in his record.