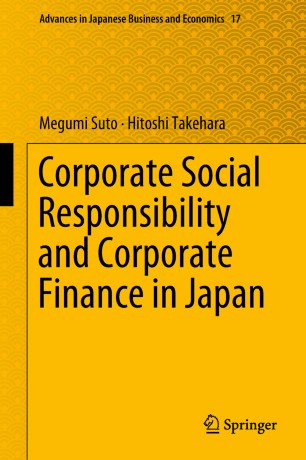 This book explores the linkages between the evolution of corporate social responsibility (CSR) and corporate financing and governance in Japan since the late 2000s. Since the 1990s, increasing economic and financial globalization has steadily eroded the Japanese style of business based on relationships and influenced the awareness and practices of CSR that are unique to Japanese companies. In Japan’s two “lost decades” after the bubble economy, the business model and corporate financing seem to have continued a gradual financial reform toward a more market-oriented system. CSR awareness and practices of Japanese companies have been influenced by social and environmental issues that global society and communities face. Furthermore, the Fukushima nuclear accident in 2011 triggered increasing attention paid to the responsibility of business toward society. In this process, major players in corporate governance and components of governance structure have continued to change. The conventional view of Japanese corporate governance and corporate finance is too narrow to understand this field in Japan. This book is based on empirical research to investigate how multifaceted CSR has aligned with business and finance and has influenced the corporate governance structure of Japanese companies. The findings and discussions in this book act are stepping stones in further research on the linkages between business and society, and provide empirical evidence on changes in Japanese corporate finance and governance.