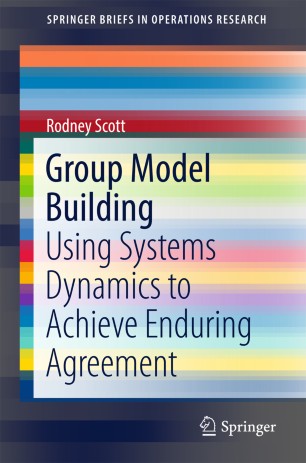 Part of the SpringerBriefs in Operations Research book series (BRIEFSOPERAT)

The causal mechanisms described here suggest a variety of design elements that should be included in group model building practice. For example, practitioners typically try to reduce complexity for clients, to make the process feel more accessible. In contrast, the findings presented here suggest that the very act of muddling through complexity increases participants’ affective commitment to the group and the decisions made.

The book also describes implications for theory and practice. System dynamics has traditionally been interested in using technical modeling processes to make policy recommendations. Group model building demonstrates that these same techniques also have implications for group decision making as a method for negotiating agreement. The book argues for the value of group model building as a mediating or negotiating tool, rather than merely a positivist tool for technical problems.

Rodney Scott is an Innovations Fellow at the Ash Center for Democratic Governance at Harvard University. He is the Principal Research Fellow for New Zealand’s State Services Commission, where he leads the public management research program and provides advice on public sector design and evaluation, and holds adjunct positions at the Australia and New Zealand School of Government and the University of New South Wales. His current research interests include interagency collaboration, governance, and performance management.