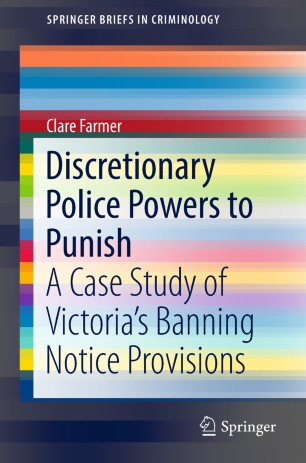 This book uses an Australian case study to shine a much-needed spotlight on discretionary police powers to punish, and their implications for justice and human rights. It offers a revealing analysis of the problematic rationales that secured the legislative passage of banning notice provisions through the State Parliament of Victoria, Australia in 2007, which occurred amidst similar developments in other jurisdictions across the world: in the UK, New Labour’s “tough on crime” initiative in the 1990s, responses to the post 9/11 terror threat, and more recent lockout laws in Sydney, Australia. The Victorian case study offers a range of datasets including Hansard parliamentary debates, Victoria Police data, media coverage and interviews with magistrates. This material provides critical insights into the broader consequences of discretionary police powers, including their effect upon the separation of powers, individual rights, and the steady and largely unchecked proliferation of discretionary police powers across most Australian jurisdictions. On the tenth anniversary of these first Victorian on-the-spot banning powers, this Brief provides a sound basis for subsequent criminological explorations of the effectiveness of banning in tackling issues of disorder, deterrence and punishment, and of the broader challenge of balancing individual rights and community protection.

Clare Farmer spent a decade serving as a Magistrate in the UK before completing her doctorate and commencing her academic career in Australia. She is now a Lecturer in Criminology at Deakin University in Geelong, Victoria  with teaching interests in criminal justice processes, responses to victims of crime and criminological research methods. Clare is currently working on a range of projects that include research into the control of alcohol-related disorder in the night-time economy, the criminal justice and human rights implications of legislative and operational responses, sentencing practices and outcomes in Victoria, Australia, and the nature and effects of the militarization of policing across a range of jurisdictions.