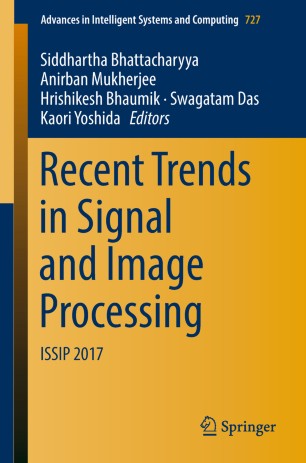 Part of the Advances in Intelligent Systems and Computing book series (AISC, volume 727)

This book contains interesting findings of some state-of-the-art research in the field of signal and image processing. It contains twenty one chapters covering a wide range of signal processing applications involving filtering, encoding, classification, segmentation, clustering, feature extraction, denoising, watermarking, object recognition, reconstruction and fractal analysis. Various types of signals including image, video, speech, non-speech audio, handwritten text, geometric diagram, ECG and EMG signals, MRI, PET and CT scan images, THz signals, solar wind speed signals (SWS) and photoplethysmogram (PPG) signals have been dealt with. It demonstrates how new paradigms of intelligent computing like quantum computing can be applied to process and analyze signals in a most precise and effective manner. Processing of high precision signals for real time target recognition by radar and processing of brain images, ECG and EMG signals that feature in this book have significant implications in defense mechanism and medical diagnosis. There are also applications of hybrid methods, algorithms and image filters which are proving to be better than the individual techniques or algorithms. Thus the present volume, enriched in depth and variety of techniques and algorithms concerning processing of various types of signals, is likely to be used as a compact yet handy reference for the young researchers, academicians and scientists working in the domain of signal and image processing and also to the post graduate students of computer science and information technology.

Siddhartha Bhattacharyya, D. Litt. [FIETE, SMIEEE, SMACM, SMIETI, LMCSI, LMOSI, LMISTE, MIET (UK), MIAENG, MIRSS, MIAASSE, MCSTA, MIDES, MISSIP] did his BS, B. Tech. and M. Tech. from University of Calcutta in 1995, 1998 and 2000 respectively. He completed PhD (Engg.) from Jadavpur University in 2008. He is the recipient of several awards like Distinguished HoD Award and Distinguished Professor Award (both 2017) and ICT Educator of the Year (2017). He is a Distinguished Speaker of ACM, USA for 2018-2020. He is currently the Principal of RCC Institute of Information Technology, Kolkata, India. He is a co-author of 4 books, co-editor of 10 books and has more than 190 research publications.

Anirbhan Mukherjee is currently Associate Professor in the Department of Engineering Science and Management of RCC Institute of Information Technology, India. He did his BE from Jadavpur University in 1994 and PDOM from IGNOU, New Delhi in 1998. He completed his PhD (Engg.) IIEST, Shibpur in 2014. He has over 18 years of teaching and 10 years of research experience. He has published 4 journal papers, 2 book chapters, 9 conference publications, and 19 books (including 2 text books for UG engineering and 16 co-authored books for 6 Universities of India on Computer Graphics & Multimedia).

Hrishikesh Bhaumik is currently serving as an Associate Professor in the Department of Information Technology at RCCIIT. Hrishikesh did his BS from Calcutta University in 1997, AMIE in 2000 and M. Tech. from BE College, Shibpur in 2004. He is with RCCIIT for more than thirteen years. He received several sponsorships from ICTP, Italy and acted as a major contributor to the EUIndia Grid project during 2010 to 2012. Hrishikesh has acted as a coordinator and resource person in several AICTE/ISTE sponsored workshops held in different parts of the India. He was previously the Head of Dept. of IT at RCCIIT.

Swagatam Das is currently an assistant professor at the ECSU of Indian Statistical Institute, Kolkata. Dr. Das has published one research monograph, one edited volume, and more than 150 research articles in peer-reviewed journals and international conferences. He is the founding co-editor-in-chief of Elsevier journal Swarm and Evolutionary Computation. He serves as associate editors of the IEEE Trans. on Systems, Man, and Cybernetics: Systems, IEEE Computational Intelligence Magazine, IEEE Access, Neurocomputing, Information Sciences, and Engineering Applications of Artificial Intelligence. He is the recipient of the 2012 Young Engineer Award from the Indian National Academy of Engineering (INAE).Dr. Das has 7500+ Google Scholar citations and an H-index of 44 till date.