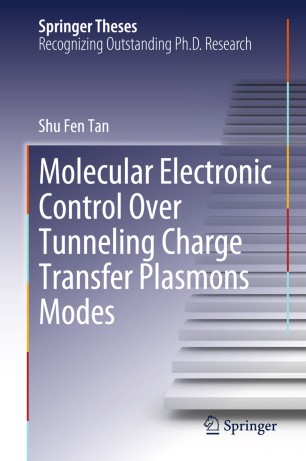 This thesis describes the controlled immobilization of molecules between two cuboidal metal nanoparticles by means of a self-assembly method to control the quantum plasmon resonances. It demonstrates that quantum-plasmonics is possible at length scales that are useful for real applications. Light can interact with certain metals and can be captured in the form of plasmons, which are collective, ultra-fast oscillations of electrons that can be manipulated at the nano-scale. Surface plasmons are considered as a promising phenomenon for potentially bridging the gap between fast-operating-speed optics and nano-scale electronics. Quantum tunneling has been predicted to occur across two closely separated plasmonic resonators at length scales (<0.3 nm) that are not accessible using present-day nanofabrication techniques.

Unlike top-down nanofabrication, the molecules between the closely-spaced metal nanoparticles could control the gap sizes down to sub-nanometer scales and act as the frequency controllers in the terahertz regime, providing a new control parameter in the fabrication of electrical circuits facilitated by quantum plasmon tunneling.

Shu Fen Tan received her B.S. and Ph.D., both in Chemistry from National University of Singapore (NUS) (2011 and 2016 respectively), working with Associate Professor Christian Nijhuis on the research project in the field of Molecular Plasmonics. During her Ph.D., she won multiple prestigious awards for her academic excellence including the Best Graduate Researcher Award 2014 in the Department of Chemistry, the TOP Graduate Researcher Award 2014 in the Faculty of Science in NUS, the Best Poster Award 2015 in international conference on materials (ICMAT) and Singapore National Institute of Chemistry (SNIC) Gold Medal for Most Outstanding Ph.D. Thesis in Chemistry for AY2015/2016. She has published more than 10 research articles in journals of high impact factor including Science, Nature Chemistry, Nature Communication, Accounts of Chemical Research, Journal of the American Chemical Society, ACS Nano etc. within the short span of her academic career. She is now working as a postdoctoral researcher in Mirsaidov’s lab – the leading expert in the field of liquid-cell microscopy to conduct meaningful research for understanding the physical and chemical interactions that govern the nanoparticle organization which potentially lay the foundation for rational design of desired assembled nanostructures for applications in catalysis, opto-electronic and drug delivery.