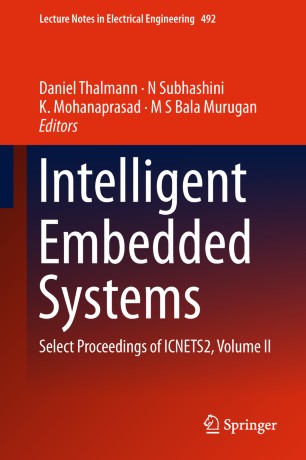 This book is a collection of papers from international experts presented at the International Conference on NextGen Electronic Technologies (ICNETS2). ICNETS2 encompassed six symposia covering all aspects of electronics and communications engineering, including relevant nano/micro materials and devices. Highlighting recent research in intelligent embedded systems, the book is a valuable resource for professionals and students working in the core areas of electronics and their applications, especially in signal processing, embedded systems, and networking. The contents of this volume will be of interest to researchers and professionals alike.

Prof. Daniel Thalmann is a Swiss and Canadian Computer Scientist. He is one of the most highly cited scientists in Computer Graphics. He is currently Honorary Professor at EPFL, Switzerland and was since 2009 with the Institute for Media Innovation, Nanyang Technological University in Singapore. Pioneer in research on Virtual Humans, his current research interests also include social robots, crowd simulation and Virtual Reality. Daniel Thalmann has been the Founder of The Virtual Reality Lab (VRlab) at EPFL, Switzerland, Professor at The University of Montreal and Visiting Professor/Researcher at CERN, University of Nebraska, University of Tokyo, and National University of Singapore. He is Co-Editor-in-Chief of the Journal of Computer Animation and Virtual Worlds, and member of the editorial board of 12 other journals. Daniel Thalmann was Program Chair and Co-Chair of several conferences including IEEE-VR, ACM-VRST, and ACM-VRCAI. Daniel Thalmann has published more than 600 papers in Graphics, Animation, and Virtual Reality. He is coeditor of 30 books, and coauthor of several books including ‘Crowd Simulation’ (second edition 2012) and ‘Stepping Into Virtual Reality’ (2007), published by Springer. He received his PhD in Computer Science in 1977 from the University of Geneva and an Honorary Doctorate from University Paul-Sabatier in Toulouse, France, in 2003. He also received the Eurographics Distinguished Career Award in 2010, the 2012 Canadian Human Computer Communications Society Achievement Award, and the CGI 2015 Career Achievement.

N.Subhashini received her B.E degree in Electronics and Communication Engineering from University of Madras. She Obtained her Master’s degree in Systems Engineering and Operations research from College of Engineering , Guindy. She was awarded a gold medal in PG for securing the highest rank in the University  and  also awarded a Gold medal for being the  Best Outgoing  Student in the year 2006.With over 12 years of experience in teaching UG and PG students, she is currently working as Assistant Professor in School of Electronics Engineering, VIT Chennai. She has guided a number of UG and PG students in many projects  Her research interests include Optical Metro/Access networks, FTTx technologies, Next Generation architectures and services, optical fiber technology and WDM Systems. She has presented and published a number of papers in peer reviewed journals and conferences. She is currently working in Optical Networks and her research focuses on the design and performance evaluation of optical networks, especially Passive Optical Networks. She is an active member of the Optical and Microwave research group in VIT, Chennai and has organised several workshops and seminars in the field of optical networks.

M.S. Balamurugan has 10 years experience in Teaching and Industry, with a year research experience at CEDT [Centre for Electronics Design and Technology], IISc, Bangalore, India. He is currently working as Assistant Professor in VIT University Chennai campus and also chairs the IoT working committee in the School of Electronics Engineering. His area of interest includes Embedded System and IoT. He has published 10 papers in International conferences and journals. His recent research includes deploying real-time operating system (RTOS) in heterogeneous multicore architectures and multistandard protocol gateway for IoT.