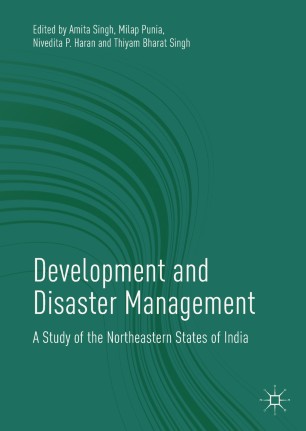 A Study of the Northeastern States of India

This book highlights the relationship between disasters and development through a socio-cultural study of human geography and governance institutions. It studies the cause, context and consequences of disasters in one of the most fragile Himalayan regions in India. The book establishes the fact that disaster management is built within the framework of good governance, without which it has no meaning.  For lack of effective and responsive governance, development has lagged behind and even though the frequency of disasters has been increasing, little is being done to redesign developmental frameworks to prevent ensuing losses. Besides, the near absence of governmental support during recurrent disasters, communities have cumulatively become reservoirs of innovations to cope up with disasters. The resilience plans need not follow implanted models but may be cost effective only if they apply a bottom up approach. Just as the region is culturally diverse so are the challenges encountered by local communities in terms of generating resilience to every disaster. Despite more than a decade of the Disaster Management Act (DMA) of 2005, most of the states in this northeastern fringe of India continue to wait for its implementation beyond mere structures and offices. The book suggests that urgent action is required in accordance with the DMA 2005 towards inter-agency coordination, proactive participation of local governance, mobilization of Community based Organizations (CBOs) and curriculum based training in every academic and technical institution. Governments of these northeastern states of India should establish accountability of State Disaster Management Authorities and inspire them to participate proactively with communities for an effective resilience building in the region.

Professor Singh teaches Law and Governance at the Centre for the Study of Law and Governance at JNU. She has been the longest serving Secretary General of NAPSIPAG (Network of Asia Pacific Schools and Institutes of Public Administration and Governance) initiated by ADB 2004 at INTAN Malaysia. She is Member Secretary of the Institutional Ethics Review Board and Member of the Indian Council of Social Sciences Research, Delhi. She has a wide research experience of evaluating best governance practices and working with the government (DARPG, India) and the Global Innovators Network, at the John F. Kennedy School of Government, Harvard University. She was awarded the Australia-India Council Fellowship (2006-2007) for academic research in nine Australian Universities and was again awarded the Australian Monash Fellowship in 2017. She has been closely associated with the International Womens’ Association at Hunter College SUNY USA in 1990 to prepare for the Beijing Declaration in 1995. She has received the Bangladesh National Award of ‘Nawab Bhadur Syed Nawab Ali Chowdhury National Award’ 2014 for women empowerment. Professor Singh is an ardent activist of the ‘Rights of Nonhuman Species’.

Professor Punia teaches geography at the Centre for the Study of Regional Development, School of Social Sciences, JNU. He is specialized in Remote Sensing and Geographic Information System (GIS). He has worked as Scientist in Photogrammetry and Remote Sensing Division, Indian Institute of Remote Sensing-Indian Space Research Organization (IIRS-ISRO) and adjunct faculty to Centre for Space Science and Technology Education in Asia and the Pacific (Affiliated to the UN), Dehradun, India. He was awarded C.V. Raman fellowship to carry out Post Doctoral research work on urban studies from School of Forestry and Environment Studies, Yale University, USA in the year 2013-14. His areas of research include land use change, climate change, spatial data analysis for urban planning and regional development; spatial aspects of governance, disaster management, sustainability studies and to bridge research gap between social sciences and geospatial discipline. He has completed many international research projects, namely Subaltern Urbanisation funded by ANR France, Risks & Responses to Urban Futures funded by ESPA, UK and ReMapping of Global South funded by DAAD and national projects ,namely Snow Spectral Properties and Regional Climate funded by DST, GoI, Spatial Governance of Decentralised Local bodies funded by ICSSR and Geovisualisation of landscape and e-learning course funded by DST, Government of India. He has published an edited book Marginalization in Globalizing Delhi: Issues of Land, Livelihoods and Health and has more than 50 research papers in the reputed national and international journals. Currently holding administrative position of Director Admissions at JNU, New Delhi, India.

Dr. Haran, a post-graduate in Philosophy from Jadavpur University, Kolkata, India in 1976 in I Class
and a  PhD in Sociology from IIT, Delhi on the topic Bureaucracy in India was selected to the Indian Administrative Service (IAS) in 1980. She has more than three decades of rich professional experience with the IAS in India and in the state of Kerala where she served in several senior positions of leadership and decision making. She held crucially important positions as a District Planning Officer, as a Head of Revenue Administration, Land Administration, Land Records Management, Renewable Energy in Public Offices, coping Climate Change Strategies, and post-Tsunami Rehabilitation project. She also held the position of Deputy Secretary in the  Department of Administrative Reforms & Public Grievances, Ministry of Personnel, Government of India, New Delhi. As the Home Secretary, she brought some meaningful innovations such as the digitization of police records, simplification of procedures, bringing transparency and accountability through the use of new cost-effective technological innovations such as Video Conferencing and other ICT applications. She has also been the Director of The Centre for Innovations in Public Systems at Hyderabad. Her most passionate project with the NAPSIPAG (Network of Asia Pacific Schools and Institutes of Public Administration and Governance, JNU) was the creation of NYSAF (Network of Young Scholars and Administrators Forum) by bringing academic research closer to  administrators and enable them to work together for the country’s development.

Thiyam Bharat Singh, is Reader in the Centre for Study of Social Exclusion & Inclusive Policy (CSSEIP), Manipur University (MU), India. He is currently editor of Working Paper (ISSN No: 2393) of CSSEIP, MU. He is also an editor of a book entitled Social Exclusion, Marginalisation and Deprivation in Manipur, published by the Akansha Publishing House, New Delhi, India.  He has co-edited a book titled Social Exclusion and Inclusive Development in the North East. Dr. Thiyam Bharat Singh was one of the Review Committee Members of Dictionary of Economics for Schools published by NCERT, New Delhi. He is currently undertaking a research project on “Estimation of Poverty in Manipur”, under the sponsorship of Planning Department, Government of Manipur, India. Apart from this, he has been able to complete two Major Research Projects under the financial assistance of University Grants Commission (UGC) and Indian Council of Social Science Research (ICSSR), New Delhi. His articles have been published in Journals such as Economic & Political Weekly (EPW), Indian Economic Journal (IEJ), MARGIN (SAGE publication), NCAER and Journal of Exclusion Studies. He has organized several seminars, workshops and conferences (both international and national) on various issues as a Convener. Apart from that, he has also presented papers in various international and national seminars. His areas of interest is development economics, trade, poverty, tourism, gender, socioeconomic resilience and disaster reduction and social exclusion.