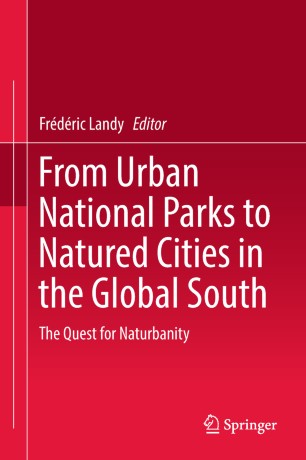 From Urban National Parks to Natured Cities in the Global South

This important volume focuses on the sensitive issue of interrelationships between national parks situated near or within urban areas and their urban environment. It engages with both urban and conservation issues and and compares four national parks located in four large cities in the global South: Rio de Janeiro, Cape Town, Mumbai, and Nairobi. Though primarily undertaken as academic research, the project has intensively collaborated with the institutions in charge of these parks. The comparative structure of this volume is also original and unique: each of the chapters incorporates insight from all four sites as far as possible.
The term “naturbanity” expresses the necessity for cities endowed with a national park to integrate it into their functioning. Conversely, such parks must take into account their location in an urban environment, both as a source of heavy pressures on nature and as a nexus of incentives to support their conservation. The principle of non-exclusivity, that is, neither the city nor the park has a right nor even the possibility to negate the other’s presence, summarizes the main argument of this book. Naturbanity thus blurs the old “modern” dichotomy of nature/culture: animals and human beings can often jump the physical and ideological walls separating many parks from the adjacent city. The 13 chapters and substantive introduction of this volume discuss various aspects of naturbanity: the histories of park creation; interaction between people and parks; urban governance and parks; urban conservation models; wildlife management; environmental education; and so on. This is a must-read for students and researchers interested in social ecology, social geography, conservation, urban planning and ecological policy.

Frédéric Landy is Director, French Institute of Pondicherry, India, and Professor and head, Department of Geography, University of Paris Ouest-Nanterre-La Défense (formerly Paris 10), France. He was earlier Fellow, centre Mosaïques, UMR LAVUE, Honorary Fellow, Institut Universitaire de France, and Associate Fellow, Centre for Studies on India and South Asia (CEIAS) (CNRS-EHESS), Paris. He has a Ph.D. in geography from the Ecole des Hautes Etudes en Sciences Sociales, Paris. He is board member of the AQAPA project 'To whom do the landscapes belong ? Touristification in southern Asian highlands: social dynamics and landscape heritagisation of ethnic minorities in rural areas' (funded by the French National Agency for Research), and was Head of the UNPEC project 'Urban National Parks in Emerging Countries – Rio de Janeiro, Mumbai, Cape Town, Nairobi' funded by the French National Agency for Research. Some of his published works include: Feeding India. The spatial parameters of food grain policy (2009); Food and agriculture in India. From Independence to globalization (coauthored with B. Dorin, 2009); Megacity slums. Social Exclusion, Space and Urban Policies in Brazil and India (coedited with M.C. Saglio-Yatzimirsky, 2013), and so on.