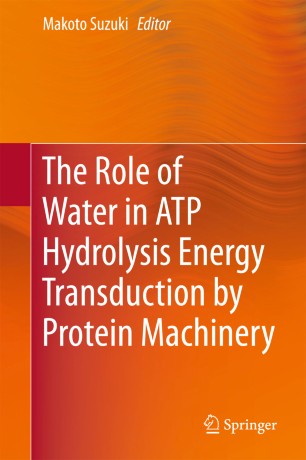 This book introduces recent progress in biological energetics from ATP hydrolysis to molecular machineries. The role of water is now recognized to be essential in biological molecular energetics. Although energetics is a rather distant field to many biologists, any working models for protein machineries such as protein motors, transporters, and other enzymes must be consistent with their energetics. Therefore, the book is intended to help scientists build systematic models of biomolecular functions based on three categories: (1) ATP hydrolysis reactions including ionic hydration and protonation–deprotonation of biomolecules, (2) protein–ligand/protein–protein interactions including hydration–dehydration processes, and (3) functioning mechanisms of protein machineries based on water functions.

Makoto Suzuki graduated from Yamagata University in 1974 and received his Doctor of Engineering degree from Tohoku University in 1981. Following his studies, he worked at the Mechanical Engineering Laboratory (MEL/AIST) for eleven years, and at the National Institute for Advanced Interdisciplinary Research (NAIR/AIST) for five years.
He moved from NAIR to Tohoku University as a professor in 1996. Using his improved-high-precision system of dielectric spectroscopy, he discovered hyper-mobile water (HMW) in the hydration layer of actin filaments, one of the contractile muscle proteins, in 2003. He organized "Water Plays the Main Role in ATP Energy Transfer" (2008-2012) as an Innovative Scientific Research Area, an interdisciplinary project focused on the energetics of protein machineries.