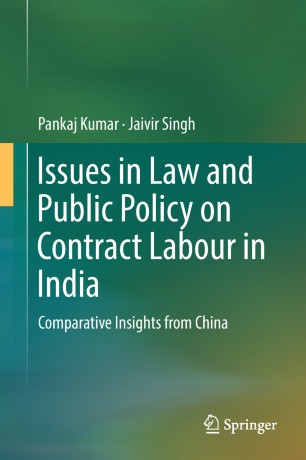 Issues in Law and Public Policy on Contract Labour in India

This book discusses the increasing use of contract labour in India that has accompanied attempts to liberalise the economy. After briefly examining Indian labour laws and public policy, it juxtaposes the country’s labour market practices with international labour standards. The questions that are raised are then explored through a series of empirical studies investigating the use of contract labour in a variety of industries and locations, manifesting a wide-spectrum of concerns including labour standards, productivity and employment relations. The set of comparative research studies within India are supplemented with a field study from the Shenzhen and Guangzhou industrial regions of South China, which are in an advanced stage of industrial development.

The unprecedented inflow of capital into China has captivated many developing countries, including India, which has gone on to mimic similar strategies particularly in terms of labour market deregulation. In this context, a set of crucial questions arise – can enforcing ‘labour market flexibility’ in itself provide the required impetus for a nation’s industrial growth? Is the Chinese success in becoming the major destination for foreign direct investments (FDIs) a consequence of a flexible labour regime or is there some other concealed strength to be found in Chinese labour market institutions? In particular it needs to be noted that after double-digit growth for more than 25 consecutive years, China has recognised some of the fallacy of its development path and in 2008 adopted fairly stringent labour laws, which now regulate its labour market.

This Chinese trajectory perhaps has lessons for India and other countries that are still struggling on the liberal path. In particular, the Chinese example helps put the Indian field studies in perspective and provides insights into India-specific policy recommendations that could also be useful for the developing world. The book concludes with the observation that where production entails long-term relationships, the interests of both the employer and the workers need to be maintained sustainably. As the title suggests, the book provides takeaways, not only for academics and researchers working in this field but also for lawyers, consultants, politicians, bureaucrats, and policymakers.

contemporary and social economic development. There are very few studies which look

systematically at labour is regulated in the two countries. Pankaj Kumar and Jaivir Singh

fill this gap through legal analysis and fieldwork in the two countries.”

Pankaj Kumar is a serving government official with more than eighteen years’ experience in handling labour affairs. He has pursued multi-sited and multi-faceted ethnographic field research on contract labour across a wide spectrum in India and China and partly in Detroit, USA. An expert on contract labour, Kumar’s research interest is in the field of collective bargaining, contracting, social security, skill development and management–workers interface. He holds a PhD in contract labour and is a postgraduate in public policy.

Professor Jaivir Singh of the Centre for the Study of Law and Governance, Jawaharlal Nehru University, New Delhi, India, is a respected academic in the field of labour and economics in the country. His research interests are centred around labour laws, institutional economics, law and economics, and constitutional political economy. He has widely published on the economics of labour law, labour laws and special economic zones, competition policy, regulation, legal procedure, judicial activism and separation of powers.