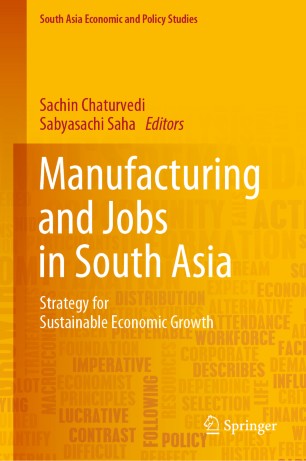 Manufacturing and Jobs in South Asia

This book analyzes the structural factors that underlie the persistent mass poverty and extreme inequality in South Asian countries. It highlights the fact that the supposed trade-off between output growth and job creation is a false dilemma. Growth can create jobs, and jobs can drive growth, mutually reinforcing one another. Increased employment and better jobs would mitigate the problems arising from a widening inequality gap. The book argues that policies focused on employment generation, mostly through industrialization, are the way forward in terms of providing livelihoods, sustaining growth and reducing inequality.

The book is divided into two main parts. Part A explores cases in selected countries in South Asia in detail, primarily focusing on the opportunities and challenges of job creation in the manufacturing sector, as well as related issues, including constraints on manufacturing-sector growth in South Asia, exports and trade linkages, participation in value chains and the role of investment. In turn, Part B addresses a number of aspects that can promote a deeper understanding of strategies for industrialization and employment creation in the South Asian context, including regional cooperation, skill development, and industrial competitiveness. Gathering contributions from some of the region’s top minds, this book is of interest to scholars, researchers, policymakers and industry analysts alike.

Sachin Chaturvedi is Director General of the Research and Information System for Developing Countries (RIS), a New Delhi-based autonomous think-tank. He was also a Global Justice Fellow at the MacMillan Center for International Affairs at Yale University. His work addresses issues related to development cooperation policies and South–South cooperation. He has also worked on trade and innovation linkages with a special focus on the World Trade Organization (WTO). Dr. Chaturvedi has served as a Visiting Professor at Jawaharlal Nehru University (JNU) and has also worked as a consultant to the UN Food and Agriculture Organisation, World Bank, UN-ESCAP, UNESCO, OECD, the Commonwealth Secretariat, IUCN, and to the Government of India’s Department of Biotechnology and the Ministry of Environment and Forests.

Sabyasachi Saha is an Assistant Professor at the Research and Information System for Developing Countries (RIS), New Delhi. He specialises in innovation economics, technology transfer, industrial development and trade. He has published research articles in academic journals and edited volumes, and has presented his research at prominent international conferences. He previously worked as a senior member of research staff at the New Delhi based Indian Council for Research on International Economic Relations (ICRIER) and Jawaharlal Nehru University (JNU), and has received the WIPO prize, a DAAD-funded fellowship, and a Government of India grant. He has also participated in numerous high-level policy/think-tank forums in India and abroad.