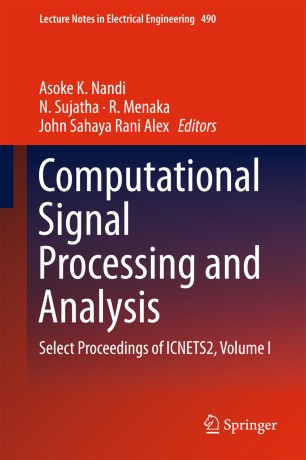 Select Proceedings of ICNETS2, Volume I

This book comprises a collection of papers by international experts, presented at the International Conference on NextGen Electronic Technologies (ICNETS2-2017). ICNETS2 encompassed six symposia covering all aspects of electronics and communications engineering domains, including relevant nano/micro materials and devices. Featuring the latest research on computational signal processing and analysis, the book is useful to researchers, professionals, and students working in the core areas of electronics and their applications, especially signal processing, embedded systems, and networking.

Professor Asoke K. Nandi received his Ph.D. degree from the University of Cambridge (Trinity College). He has held positions at the University of Oxford, Imperial College London, the University of Strathclyde, and the University of Liverpool. In 2013, he moved to Brunel University London as the Head of Electronic and Computer Engineering. In 1983, his co-discovery of the three particles (W+, W− and Z0) was recognized by the Nobel Committee for Physics in 1984. He has made numerous fundamental contributions to signal processing and machine learning and has authored over 550 technical publications, with an h-index of 67. He is a fellow of the Royal Academy of Engineering, UK and of seven other institutions including the IEEE. Among the many awards he has received are the IEEE Heinrich Hertz Award (2012), the Glory of Bengal Award for his outstanding achievements in scientific research (2010), the Institution of Mechanical Engineers Water Arbitration Prize (1999), and the Mountbatten Premium from the Institution of Electrical Engineers (1998).

Dr. N. Sujatha graduated in Biomedical Optics from NTU (Nanyang Technological University) Singapore and is an associate professor at the Department of Applied Mechanics, IIT Madras, India. She has also served as a visiting associate professor at NTU Singapore in 2014–2015. Her major research interests are laser-based diagnostic imaging and diagnostic optical spectroscopy. She has co-authored a book chapter and published over 50 international journal/conference papers, several of which have won best paper awards. She is a member of International Society for Optical Engineering, Optical Society of America, and is a fellow of the Optical Society of India.

Dr. R. Menaka received her doctoral degree in Medical Image Processing from Anna University, Chennai and is currently an associate professor at the School of Electronics Engineering at VIT, Chennai. She has served in both industry and academia for more than 25 years and has published over 35 research papers in various national and international journals & conferences. Her areas of interest include signal and image processing, neural networks and fuzzy logic.

John Sahaya Rani Alex is an associate professor at the School of Electronics Engineering at VIT, Chennai. She has worked in the embedded systems and software engineering fields for 12 years, which includes 7 years’ experience in the USA. Her research interests include spoken utterance detection and implementations of digital signal processing (DSP) algorithms in an embedded system. She is a member of IEEE and the IEEE Signal Processing Society.