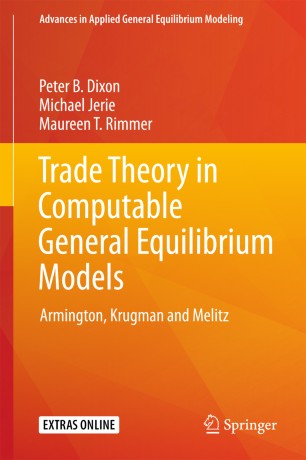 This book is for people who want to understand modern trade theory, particularly the Melitz model.  It lays out Melitz theory from first principles and relates it to earlier theories of Armington and Krugman.  For trade theory specialists, the book produces some significant conclusions.  It identifies conditions under which Krugman and Melitz models produce essentially the same results for the welfare effects of trade liberalization as those obtained from Armington, and conditions under which this is not true.  These findings will be of interest to academics and policy advisors who need to understand critiques of Armington by proponents of Krugman and Melitz.
For computable general equilibrium (CGE) modelers, the book shows how Melitz-style CGE models can be calibrated, solved and interpreted.  A major practical contribution of the book is to show how large-scale Armington models such as GTAP can be converted to Melitz by the addition of a small number of equations and minimal alteration of the original Armington model.
The book describes computational experience in solving Melitz CGE models using GEMPACK software.  This experience will be of interest to researchers currently attempting to solve Melitz-based CGE models. Almost all previous Melitz studies have used GAMS software.  Authors of these studies have reported computational difficulties.  These difficulties did not occur in this book’s GEMPACK-based computations.
The book concludes that: (a) CGE modelers can embrace Melitz while retaining their Armington-based models as powerful interpretive devices; and (b) via GEMPACK, large-scale CGE models incorporating Melitz specifications can be solved with no more difficulty than similar-dimensioned Armington models.

Peter Dixon is Professor at the Centre of Policy Studies, Victoria University, Australia, and is known internationally for his work in CGE modeling. Together with colleagues at the IMPACT Project and CoPS, he created the ORANI model and its dynamic successor, MONASH. These models have been prominent in the Australian economic debate for 40 years and have been used as templates for the development of other models throughout the world. He is the principal author of the ORANI and MONASH books published in the North Holland Contributions series. In recent years he has led the development of the USAGE model of the U.S. which is used by the USITC and the departments of Commerce, Homeland Security, Agriculture and Transportation.
Michael Jerie is Senior Research Fellow at the Centre of Policy Studies, Victoria University, Australia. His main research area is developing GEMPACK (General Equilibrium Modelling PACKage), a suite of programs for formulating, solving and interrogating economic models. He is the co-author of numerous GEMPACK documents which are used world-wide by CGE modelers.
Maureen T. Rimmer is Professor at the Centre of Policy Studies, Victoria University, Australia. Her main area of expertise is model development and application. With Peter Dixon she is the co-developer of the MONASH model of the Australian economy. In the last fifteen years she has been a key contributor in the development, application, and documentation of USAGE. She has made major contributions in applications of the model to key policy areas such as the replacement of imported crude oil with domestically produced biofuels, legalization of unauthorized immigrants, and the effects of terrorism events on the U.S. economy.