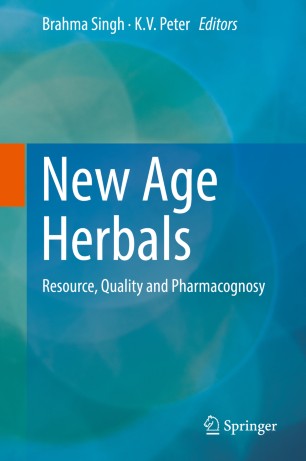 Importance of herbs (medicinal plants) can hardly be overemphasized. They are exploited for manyfold applications, ranging from phytopharmaceuticals, to nutraceuticals, to cosmetics and many others. Keeping in view the richness of herbs and their vast potential, this book collates the most up-to-date knowledge of important herbs and herbals. The book also gives an overview of some issues causing hindrance in the promotion of herbals. This book attempts to compile the rich experience of experts working on various herbs. New age single plant species, having multiple medicinal traits worth exploiting i.e. Hippophae rhamnoides (seabuckthorn), and Morinda citrifolia (noni) also find place as full chapters in the book.

Prof. Brahma Singh is a highly respected Indian Horticulturalist, known for his expertise on protected cultivation, and his efforts in developing agro-technologies for the high altitude areas of the Himalayan region of Leh, and for identifying and popularizing the fruit crops of sea buckthorn and Indian mulberry (Noni). The Government of India honored him, in 2014, by awarding him the Padma Shri, the fourth-highest civilian award, for his contributions to the fields of science and technology.
Brahma Singh, an emeritus DRDO scientist, holds numerous important positions: He is the founder president of the Indian Society for Protected Cultivation and the former president of Society for New Age Herbals, both New Delhi based organizations, as well as the World Wellness Forum, Chennai. He is also an advisor to the World Noni Research Foundation, Chennai, and a member of the Indian Academy of Sciences, Allahabad and Indian Science Congress, Kolkata.
He has been awarded fellowships by several academic and scientific organizations such as the Horticulture Society of India, the National Academy of Biological Sciences, the National Academy of Agricultural Sciences, the Association of Food Scientists and Technologists (India), the Bio-ved Society, the International Society of Noni Science and the Indian Society of Vegetable Sciences. He received the G. B. Pant University of Agriculture and Technology Merit in 1964 during his college days, and the Indira Priyadarshini Vrikshmitra Award from the Ministry of Environment and Forests in 1995. In 2002, he received the International Plant Scientist Award from the Academy of Plant Sciences. The Agriculture Alumni Association, Patna Nagar honored Dr. Singh with the Life Time Achievement Award in 2012 which was followed by the Shivshakti Life Time Achievement Award, in 2013, from the Horticulture Society of India and Life Time Achievement Award by the Alumni Almamater Advancement Association (4A), Pantnagar, 2016.
Prof. K.V. Peter is an extremely experienced scientist, with expertise in Agricultural science & forestry; and horticulture-vegetable Breeding. He has held a number of important scientific posts, such as, Director, World Noni Research Foundation, Chennai (2007); Vice-Chancellor, Kerala Agricultural University (2001-2006); Director of Research, Kerala Agricultural University (1999-2001); Director, Indian Institute of Spices Research, Calicut (1991-1999); Professor of Horticulture, KAU (1979-2008); Assistant Professor, GBPUAT, Pantnagar (1975-1979).
He is a recipient of a number of prestigious awards, such as, Dr Harbhajan Singh Award (1993); Rafi Ahmed Kidwai Award (1996-1998); Silver Jubilee Medal (1998); Silver Jubilee Memento (1998); Dr. M.H.Marigowda National Award (2000); National Award for Processing and Product Development, DBT (2003); HSI-Shivasakthi Lifetime Award of HIS (2008); The PNASF National Gold Medal Award for best scientist (2009).
He is also a fellow of a number of scientific academies, such as, National Academy of Agricultural Sciences, New Delhi; National Academy of Sciences, Allahabad; Indian Society of Genetics and Plant Breeding, New Delhi; Indian Society of Vegetable Sciences, Varanasi.