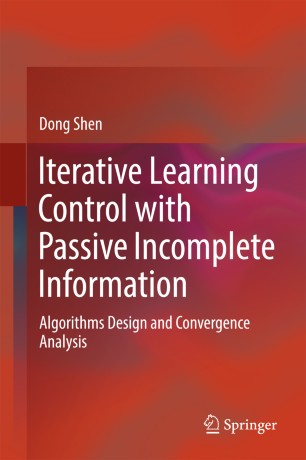 With numerous intuitive figures to make the content more accessible, the book explores several potential solutions to this topic, ensuring that readers are not only introduced to the latest advances in ILC for systems with random factors, but also gain an in-depth understanding of the intrinsic relationship between incomplete information environments and essential tracking performance. It is a valuable resource for academics and engineers, as well as graduate students who are interested in learning about control, data-driven control, networked control systems, and related fields.

Dr. Dong SHEN received the B.S. degree in mathematics from Shandong University, Jinan, China, in 2005. He received the Ph.D. degree in mathematics from the Academy of Mathematics and Systems Science, Chinese Academy of Sciences (CAS), Beijing, China, in 2010.
From 2010 to 2012, Dr. Shen was a Post-Doctoral Fellow with the Institute of Automation, CAS. Since 2012, he has been an Associate Professor with College of Information Science and Technology, Beijing University of Chemical Technology (BUCT), Beijing, China. He was a visiting scholar at National University of Singapore from 2016 to 2017.
Dr. Shen's current research interests include iterative learning control, stochastic control and optimization. He has published more than 50 refereed journal and conference papers. He is the author of Stochastic Iterative Learning Control (Science Press, 2016, in Chinese), co-author of Iterative Learning Control for Multi-Agent Systems Coordination (Wiley, 2017), and co-editor of Service Science, Management and Engineering: Theory and Applications (Academic Press and Zhejiang University Press, 2012). Dr. Shen received the IEEE CSS Beijing Chapter Young Author Prize in 2014 and the Wentsun Wu Artificial Intelligence Science and Technology Progress Award in 2012.