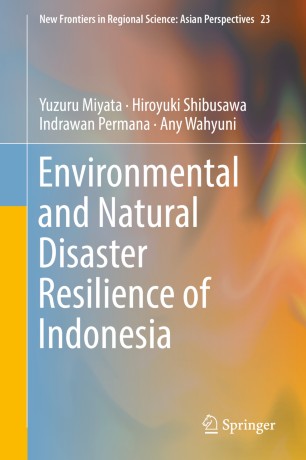 This study aims at analyzing the resilience of Indonesia from two aspects: one is was natural disaster and the other  is environmental protection. Therefore the study comprises two parts. The first aims at analyzing Palangkaraya City in Central Kalimantan Province by constructing apartial and a general equilibrium models; hence the existence of illegal settlements can  be explained systematically. The models demonstrates a new attempt in city analysis by introducing the expected flood damage rate on households’ assets. Furthermore, a numerical simulation shows a new finding, namely, that the bid rent by representative low-income households in flood-prone areas  canreceive higher than the bid rent by the representative high-income households. The second part examines (1) the provision of public goods such as road construction on the Maros–Watampone Road, and (2) the urban economics of Makassar City. In this second part, the analytic hierarchy process is  applied to design efficiency with respect to selecting the best type of road construction in a conservation area. As a result, the elevated bridge is  determined to be the most suitable type of construction, followed by cut-and-fill and the tunnel system. The second research approach uses a computable general equilibrium (CGE) model that adds environmental objectives to urban economic objectives in Makassar City. The model examines  the impact of the carbon tax based on the 2006 input–output table for Makassar City. The results of all simulations of the CGE model indicates that a carbon tax can reduce the volume of CO2 emissions by 8 %.