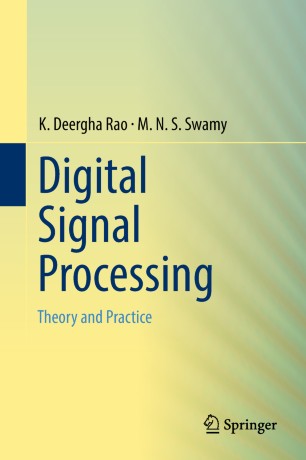 The book provides a comprehensive exposition of all major topics in digital signal processing (DSP). With numerous illustrative examples for easy understanding of the topics, it also includes MATLAB-based examples with codes in order to encourage the readers to become more confident of the fundamentals and to gain insights into DSP. Further, it presents real-world signal processing design problems using MATLAB and programmable DSP processors. In addition to problems that require analytical solutions, it discusses problems that require solutions using MATLAB at the end of each chapter.
Divided into 13 chapters, it addresses many emerging topics, which are not typically found in advanced texts on DSP. It includes a chapter on adaptive digital filters used in the signal processing problems for faster acceptable results in the presence of changing environments and changing system requirements. Moreover, it offers an overview of wavelets, enabling readers to easily understand the basics and applications of this powerful mathematical tool for signal and image processing. The final chapter explores DSP processors, which is an area of growing interest for researchers. A valuable resource for undergraduate and graduate students, it can also be used for self-study by researchers, practicing engineers and scientists in electronics, communications, and computer engineering as well as for teaching one- to two-semester courses.

K. DEERGHA RAO is currently a professor at the Department of Electronics and Communication Engineering, Vasavi College of Engineering, affiliated to Osmania University, Hyderabad, India and is former director and professor at the Research & Training Unit for Navigational Electronics (NERTU), Osmania University. He was a postdoctoral fellow and professor at the Department of Electrical and Computer Engineering, Concordia University, Montreal, Canada for four years. He has conducted several research projects for leading Indian organizations. His teaching areas include digital signal processing, channel coding, signals and systems, and MIMO wireless communications, and his current research focuses on wireless channel coding, OFDM wireless communication channel estimation, compressive sensing, and VLSI for communications. Professor Rao has presented papers at several IEEE international conferences in the U.S.A., Switzerland, Thailand, and Russia. He has more than 100 publications to his credit, including more than 60 in IEEE journals and conference proceedings. He is a senior member of the IEEE. He was awarded the IETE K.S. Krishnan Memorial Award in 2013 for the best system-oriented paper. He has authored two books, Channel Coding Techniques for Wireless Communications (Springer), and Signals and Systems (Springer), and coauthored the book Digital Signal Processing (Jaico Publishing House, India).
M.N.S. SWAMY is a research professor and holds the Concordia Chair in Signal Processing at the Department of Electrical and Computer Engineering in Concordia University, Montreal, Canada where he served as the chair of the Department of Electrical Engineering from 1970 to 1977, and the dean of Engineering and Computer Science from 1977 to 1993. He received his M.Sc. and PhD degrees in Electrical Engineering from the University of Saskatchewan, Saskatoon, Canada. He was made an honorary professor by the National Chiao Tung University, Taiwan in 2009, which is equivalent to an honorary doctorate at the institute. He has also been associated with the Department of Electrical Engineering, Technical University of Nova Scotia, Halifax, NS, Canada; the University of Calgary, Calgary, AB, Canada; and the Department of Mathematics, University of Saskatchewan. He has published extensively in the areas of circuits, systems, and signal processing (over 400 peer-reviewed journal articles and over 300 conference papers), and holds six patents. He is a coauthor of eight books and several book chapters. He is a recipient of numerous IEEE Circuits and Systems Society awards, including the Education Award in 2000, the Golden Jubilee Medal in 2000, and Guillemin–Cauer Best Paper Award. The Indian Institute of Science (IISc) in Bengaluru, a premier research institution of India, has established a gold medal and a scholarship in his name. In 1993 he was awarded the commemorative medal for the 125th Anniversary of Canada, issued by the Governor General of Canada, in recognition of his significant contributions to Canada and the community. Recently, the journal Circuits, Systems and Signal Processing (CSSP) has instituted a Best Paper Award in his name.

“The book is intended to present fundamentals aspects regarding the use of the concepts of signal and system in engineering. … The book is clearly written and addressed to undergraduate students. It represents a good introduction to further reading in communication systems, digital signal processing, control etc” (Liviu Goraş, zbMATH 1396.94001, 2018)
Buy options