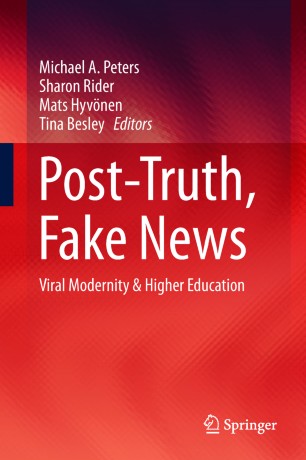 This edited collection brings together international authors to discuss the meaning and purpose of higher education in a “post-truth” world. The editors and authors argue that notions such as “fact” and “evidence” in a post-truth era must be understood not only politically, but also socially and epistemically. The essays philosophically examine the post-truth environment and its impact on education with respect to our most basic ideas of what universities, research and education are or should be. The book brings together authors working in Australia, China, Croatia, Romania, Canada, New Zealand, Portugal, Sweden, UK and USA.

Michael A. Peters is Professor of Education at the University of Waikato and Emeritus Professor of Education at the University of Illinois at Urbana–Champaign. With interests in education, philosophy and social policy, he has written over sixty books. He has acted as an advisor to governments in Scotland, NZ, South Africa and the EU. He was made an Honorary Fellow of the Royal Society of NZ in 2010 and awarded honorary doctorates by the State University of New York (SUNY) in 2012 and the University of Aalborg in 2015.
Sharon Rider is Professor of Philosophy at Uppsala University, where she was formerly Vice Dean of the Faculty of Arts. Her main research interests are in 19th and 20th century European thought, especially philosophical anthropology. She has worked on issues related to higher education, such as the idea of the university and epistemic normativity. She is Deputy Director of the interdisciplinary Engaging Vulnerability Research Program at Uppsala University.
Mats Hyvönen is a scholar in media and communications at Uppsala University and Research Coordinator for the Engaging Vulnerability Research Program. Mats’ research interests are mainly in media history, especially the study of the public sphere as a vulnerable space and how the media both resists and facilitates that vulnerability. Mats is currently preparing a research project on the contemporary and historical links between journalism and academic scholarship.
Tina Besley is Professor of Education, Associate Dean International and Director of the Centre for Global Studies in Education, University of Waikato. She held academic posts at the University of Glasgow, California State University San Bernardino and the University of Illinois at Urbana Champaign. Tina’s research interests are philosophy of education, policy, subjectivity, interculturalism and global knowledge economy. Tina is President of the Philosophy of Education Society of Australasia (PESA) and President, Association for Visual Pedagogies (AVP).