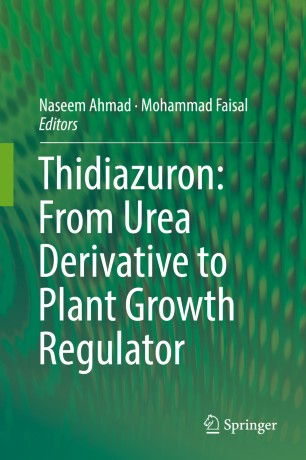 Plant biotechnology is a most interesting branch for academicians and researchers in recent past. Now days, it becomes a very useful tool in agriculture and medicine and is regarded as a popular area of research especially in biological sciences because it makes an integral use of biochemistry, molecular biology and engineering sciences in order to achieve technological application of cultured tissues, cell and microbes.
Plant tissue culture (PTC) refers to a technique of cultivation of plant cells and other parts on artificial nutrient medium in controlled environment under aseptic conditions. PTC requires various nutrients, pH, carbon source, gelling agent, temperature, photoperiod, humidity etc. and most importantly the judicious use of plant growth regulators. Various natural, adenine and phenyl urea derivatives are employed for the induction and proliferation of different types of explants. Several phenyl urea derivatives were evaluated and it was observed that thidiazuron (n-phenyl-N”-1,2,3- thidiazol-5-ulurea) was found to be the most active among the plant growth regulators. Thidiazuron (TDZ) was initially developed as a cotton defoliant and showed high cytokinin like activity. In some examples, its activity was 100 times more than BA in tobacco callus assay and produces more number of shoots in cultures than Zeatin and 2iP. TDZ also showed major breakthrough in tissue culture of various recalcitrant legumes and woody species. For the last two decades, number of laboratories has been working on TDZ with different aspect and number of publications has come out. To the best of our knowledge, there is no comprehensive edited volume on this particular topic. Hence th,e edited volume is a deed to consolidate the scattered information on role of TDZ in plant tissue culture and genetic manipulations that would hopefully prove informative to various researches.

Thidiazuron: From Urea Derivative to Plant Growth Regulator compiles various aspects of TDZ in Plant Tissue Culture with profitable implications. The book will provides basic material for academicians and researchers who want to initiate work in this fascinating area of research.

The book will contain 26 chapters compiled by International dignitaries and thus giving a holistic view to the edited volume.

Dr. Naseem Ahmad is working as Assistant Professor in the D/o Botany, Aligarh Muslim University, Aligarh (UP) India. He has also worked as Young Scientist and has more than 8 years of experience in Plant Tissue Culture and Molecular Biology. Published about 39 research papers, 01 edited Book entitled “Plant Tissue Culture: Propagation, Conservation and Crop Improvement” (Springer; 2016). He holds Life Membership of many Learned/ Scientific Societies and is a Fellow of Indian Botanical Society (FBS). He is recipient of  “Yuva Vaigiyanik Samman (2009), CST, UP; Young Scientist (2010) by NESA, N. Delhi; Rashtriya Gaurav Award (2015) by IIFS, N. Delhi and Young Scientist (2015) by  IFEE, Kolkata.  He was also a Senior Research Fellow (SRF) of CSIR, N. Delhi.

Dr. Mohammad Faisal has over 10 years of research experience in Plant Biotechnology currently working as Associate Professor in the Department of Botany & Microbiology, King Saud University, Riyadh, Saudi Arabia. He received his PhD degree in Botany from the Aligarh Muslim University, India.He has been the recipient of Plant Biotechnologist Award-2017 by SESR, India and Scientist of the Year Award-2015 by NESA and several National and International fellowships.He holds membership of several academic bodies/societies and Fellow of the SESR.He has published over 64 research articles, 3 book chapters and 2 books and his articles have been cited over 1395 times with Google h index of 23. He is in the editorial board of the several journals.