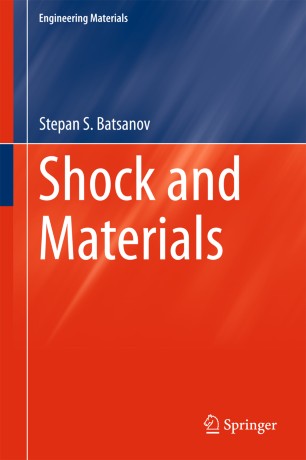 This book highlights how the properties and structure of materials are affected by dynamic high pressures generated by explosions, projectile impacts, laser compression, electric discharge or ball milling. Starting with the basics of shock-wave physics and an outline of experimental techniques, it then surveys dynamic compressibility and equations of state of various substances, phase transitions and syntheses of novel compounds under shock. It covers various industrial applications including hardening of metals and grinding (fragmentation) of solids, saturation of solids with defects for use as catalysts, production of superhard materials (synthetic diamond, BN (boron nitride)) and nanomaterials, especially nanodiamond, and discusses state-of-the-art techniques such as combining dynamic and static compression to obtain monolithic materials.

Stepan Sergeevich Batsanov was born in Moscow (November 9, 1928), obtained his MSc in Chemistry (1951); PhD on crystal-optical determination of the structure of complexes (1954) from Moscow State Universit. He received his DSc on refractometric methods in structural chemistry (1962) at Novosibirsk University, where he later became Chair in physical chemistry (1965). His main scientific interests are crystal optics, chemical structure and bonding, and (from 1966) shock-pressure chemistry and physics. He was the founder and director (in 1970–2010) of the Centre for High Dynamic Pressures (CHDP) at the State Committee of Standards at Mendeleevo, near Moscow. He authored and co-authored over 500 scientific papers and 8 books, including Structural Refractometry (in Russian, 1959, 2nd ed. 1976, English editions by Consultants Bureau, New York, 1961 & Van Nostrand, 1966), Effects of Explosions on Materials (Springer Verlag, 1994) and Introduction to Structural Chemistry (Springer, 2012).

“This volume explores phase transformation in materials, the generation of defects such as porosity and dislocations, and industrial applications. … The book is clearly intended for researchers in high energy density physics and related materials science. Summing Up: Recommended.” (J. Lambropoulos, Choice, Vol. 56 (2), October, 2018)
Buy options