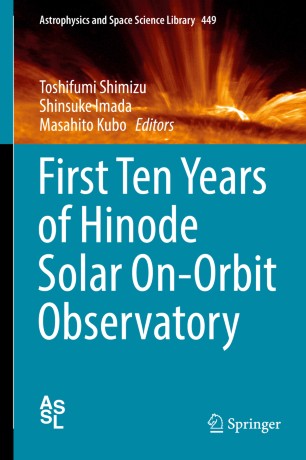 This book provides the latest scientific understanding of the Sun, sharing insights gleaned from the international solar physics project Hinode. The authors (who are the main project contributors) review, from the various viewpoints, the discoveries and advances made by the on-orbit operations of the Hinode spacecraft in its first decade. Further, they present a wealth of scientifically important photographs and data from Hinode.

Launched in September 2006, Hinode is the third Japanese solar observatory on orbit, and employs three highly advanced telescopes jointly developed and operated with international partners. The book describes the background of these research topics, how the Hinode telescopes have tackled various challenges, and the scientific achievements and impacts in the first 10 years. Furthermore, it explores future perspective of researches in Japan.

The book will benefit undergraduate students interested in recent advance in the solar research, as well as graduate students and researchers working in solar physics, the space sciences, astronomy, and plasma physics.

Toshifumi Shimizu is an associate professor at the Institute of Space and Astronautical Science, Japan Aerospace Exploration Agency. He received his doctor of science degree from the University of Tokyo in 1995 and was awarded the Zeldovich Medal in 2002 by the Russian Academy of Science and Committee on Space Research.

His work primarily focuses on solar physics and the development of space-borne instruments and spacecrafts. In particular, his research interest is in the phenomena on solar atmosphere such as solar flares and corona heating.

Shinsuke Imada is an assistant professor at the Institute for Space-Earth Environmental Research, Nagoya University. He received his Ph.D. from the University of Tokyo’s Department of Earth and Planetary Science in 2006. After serving as a researcher at National Astronomical Observatory of Japan, and as a project researcher at Institute of Space and Astronautical Science, Japan Aerospace Exploration Agency, he was appointed to his present position in 2012.

Masahito Kubo is an assistant professor at the National Astronomical Observatory of Japan. He received his Ph.D. from the University of Tokyo’s Department of Astronomy in 2005. After serving as a project researcher at the Institute of Space and Astronautical Science, Japan Aerospace Exploration Agency, and as a Post Graduate Scientist at the High Altitude Observatory, he was appointed to his present position in 2010.

Dr. Kubo’s research mainly focuses on the solar magnetism as well as the development of space-born instruments.