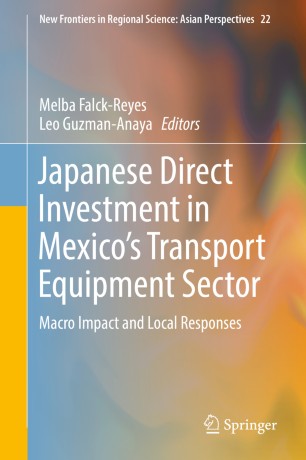 This book introduces an interdisciplinary approach to the study of Japanese foreign direct investment determinants, the close relations between foreign investment and trade flows in the host country, and the effects and responses by the local economy. It provides an accessible and comprehensive view of the overall macro impacts and local effects associated with the increasing flow of Japanese firms to Mexico’s automotive industry. The research and its outcomes presented here follow extensive fieldwork and use unique statistical datasets to integrate qualitative and quantitative approaches to the analysis. Carefully chosen case studies produce an integrated approach to the subject. As a result, the book fills a vacuum on this topic and provides readers with a clear understanding of the complex interactions among participating actors: Japanese multinationals and Japanese parts-and-components suppliers, Mexican local suppliers, government at the national and local levels, and cooperating Japanese agencies. By critically assessing current theories and empirical methodologies the monograph covers aspects related to the creation of regional production networks and their impact on trade patterns of the recipient country, location determinants of Japanese foreign investment, and spillover externalities in host entities. It presents the reader with a comprehensive view of the different levels of interaction between multinational firms, local recipient economies, and local suppliers and the challenges they face to engage in global chains of production. The book is highly recommended to academics and their students who seek to understand the complex international economic relations in the global economy. This compilation also serves as a valuable guide to policy makers, both at national and local levels, as it provides an informed analysis of how to engage local suppliers in regional and global production chains.

She participated in the Study Group of Japan-Mexico Economic Parterniship (2001). She had been visiting professor at the Institute of Developing Economies and at Kyoto University in Japan. She coordinated two series of books on Asia-Pacific and has authored articles in specialized journals, chapters on books and co-edited several books. She received a Commendation from the Ministry of Foreign Affairs of Japan for the Promotion of Mutual  Understanding between Japan and Mexico (2015).

Leo Guzman-Anaya obtained his Master Degree in Economics in 2008 from Tokyo International University, Japan, and his Ph.D. in Economics and Management Science from the University of Guadalajara, Mexico. Main research interests are focused on inter-industrial spillover effects and localization factors associated to Japanese Foreign Direct Investment in Mexico. He has been a visiting researcher at Sophia University and Seijo University in Japan and has authored several articles and book chapters related to Japanese FDI in Mexico. He is currently a Level-1 member of the National System of Researchers in Mexico.

Emma Mendoza Martínez obtained her Ph.D and M.A. in Japanese studies by El Colegio de Mexico. Main research interests have been focused on social movements in Japan, decision-making process of nuclear power policies in Japan, Japanese migration to Mexico at the beginning of twentieth century, and Japanese investment in the automotive sector in Mexico and the implications for the local economy. She has been invited researcher at Hokkaido University and Osaka University and carried out research stays in other universities in Japan. She was editor of the book Collective Action in Asia and Latin America, and has been coordinator of Japan Section of Asociación Latinoamericana de Estudios de Asia y África (ALADAA).

Has participated as a speaker at seminars at Seijo University in Tokyo, Japan, and participated in academic activities related with the promotion of research with private companies, government agencies and Universities.