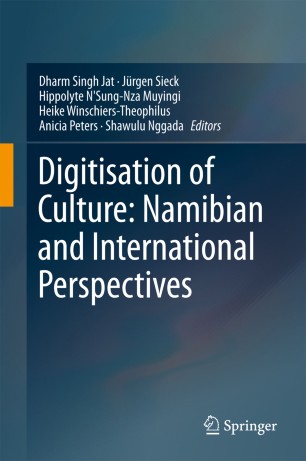 This book explores the digitization of culture as a means of experiencing and understanding cultural heritage in Namibia and from international perspectives. It provides various views and perspectives on the digitization of culture, the goal being to stimulate further research, and to rapidly disseminate related discoveries. Aspects covered here include: virtual and augmented reality, audio and video technology, art, multimedia and digital media integration, cross-media technologies, modeling, visualization and interaction as a means of experiencing and grasping cultural heritage.
Over the past few decades, digitization has profoundly changed our cultural experience, not only in terms of digital technology-based access, production and dissemination, but also in terms of participation and creation, and learning and partaking in a knowledge society. Computing researchers have developed a wealth of new digital systems for preserving, sharing and interacting with cultural resources.
The book provides important information and tools for policy makers, knowledge experts, cultural and creative industries, communication scientists, professionals, educators, librarians and artists, as well as computing scientists and engineers conducting research on cultural topics.

Prof Dharm Singh Jat received his Master of Engineering and PhD degrees in Computer Science and Engineering from a prestigious University of India. He is a Professor at the Department of Computer Science at Namibia’s University of Science and Technology (NUST). His research interests span the areas of multimedia communications, wireless and mobile technologies, SDN, network security, and roof computing. He has received more than 16 prestigious awards and has authored/co-authored over 160 publications.

Prof Jürgen Sieck received his degree in Mathematics and PhD in Computer Science from the Humboldt University, Germany. He is currently the Head of the Research Group “Informations- und Kommunikationsanwendungen” and Professor of Computer Sciences in HTW Berlin. His research interests are in AR, multimedia and mobile applications. In 2013 he was awarded an honorary doctorate from ONPU, Ukraine. Since 2013, he has been a Principal Investigator in the cluster of excellence “Bild Wissen Gestaltung” at Humboldt University. Since 2015, he has also been a Professor at NUST Windhoek.

Prof Hippolyte Muyingi is the Associate Dean: Research, Faculty of Computing & Informatics, Namibia University of Science and Technology (NUST). He was the Dean from 2014 to 2015 and held the Mobile Telecommunication Company (MTC) Endowed Chair in ICT (2009–2011). He led the Department of Computer Science, University of Fort Hare (UFH) and the NRF- and multi-industry-sponsored Telkom Centre of Excellence (2001-2008), and was awarded the Telkom Research Chair in ICT, for which there were 100 candidates. Muyingi is the co-founder of the South African Siyakhula Living Lab.

Dr Heike Winschiers-Theophilus, a Professor of Computer Science, has lectured in Namibia since 1994. Her research and community development activities center on co-designing technologies with indigenous and marginalized communities in Namibia and Malaysia. She promotes dialogical and community-based co-design, applying a transcultural approach to the principles of action research. She has co-chaired numerous international conferences, co-authored more than 80 peer-reviewed publications, supervised local and international students and received multiple grants.

Dr Anicia Peters is Executive Dean of the Faculty of Computing and Informatics at the Namibia University of Science and Technology. She has a PhD in Human Computer Interaction from Iowa State University. Dr Anicia’s research focuses on HCI, social networks and e-participation. She has a mixture of academic and industry experience having worked in Silicon Valley and Namibia. Her research work is published in the IEEE Transactions for Visualization and Computer Graphics, Computers in Human Behavior, Interacting with Computers and the ACM CHI Conference. In 2016, she chaired the International Culture and Computer Science Conference as well as the Africa Human Computer Interaction Conference (AfriCHI) both organized in-cooperation with ACM SIGCHI.