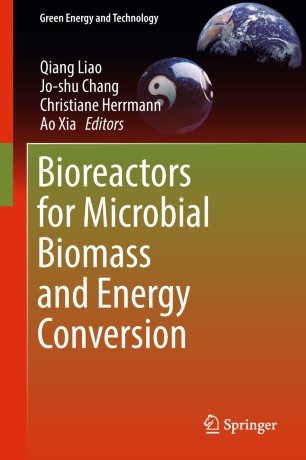 This book discusses recent trends and developments in the microbial conversion process, which serves as an important route for biofuel production, with particular attention to bioreactors. It combines microbial conversion with multiphase flow and mass transfer, providing an alternative perspective for the understanding of microbial biomass and energy production process as well as enhancement strategy. This book is relevant to students and researchers who work in the fields of renewable energy, engineering and biotechnology. Policymakers, economists and industry engineers also benefit from this book, as it can be used as a resource for the implementation of renewable energy technologies.

Prof. Qiang Liao
Dr Qiang Liao is a professor in the College of Power Engineering, Chongqing University (CQU). He is also the Director of Institute of Engineering Thermophysics (IETP) and Vice Dean of College of Power Engineering at CQU. His research focuses on bioenergy and bioreactors. He has more than 250 peer-reviewed journal papers and has a number of conference presentations. According to Scopus his work has been cited ca. 1300 times in peer-reviewed press.
Prof. Liao serves as the guest editor for International Journal of Hydrogen Energy and International Journal of Green Energy, and is on the editorial board of 12 journals such as Energy, Fuel and Applied Thermal Engineering. He has served as temporal Representative of China in International Energy Agency (IEA) Hydrogen Implementing Agreement (HIA) Task 34. He has chaired the 2012 Asian Biohydrogen and Bioproducts Symposium and served on the organising committee of 16 international conferences. He has been awarded as Distinguished Professor Cheung Kong Scholars from the Education Ministry of China and Distinguished Young Scholar from the National Natural Science Foundation of China.
Prof. Jo-Shu Chang
Dr. Jo-Shu Chang is Deputy Director of Research Center for Energy Technology and Strategy and University Chair Professor of Department of Chemical Engineering at National Cheng Kung University, Tainan, Taiwan. He received his Ph.D. degree from University of California, Irvine (USA) in 1993. His research interests cover biochemical engineering, environmental biotechnology and applied microbiology with a recent focus on microalgae-based CO2 reutilization, biofuels production, and biorefineries. He plays an important role in Taiwan’s biomass energy R&D and policy making. Since July 2006, he has served as member of National Bioethanol Standard Committee for Bureau of National Standard, Ministry of Economical Affairs, Taiwan. He is the leading PI of National Energy Project working on flue-gas CO2 fixation by microalgae with the subsequent biofuels and bio-based chemical production. He is fellow of American Institute of Medical and Biological Engineering (AIMBE) and has received numerous prestigious domestic and international academic awards. He has published nearly 350 SCI-indexed journal papers (including twelve ISI Hi-Ci papers) with a total citation of over 10,000 times and an h-index (Web of Science) of 53. He also authored seven books and owns more than 40 patents. He is now the editor, associate editor, guest editor, and editorial board member of twelve SCI-indexed journals. He also serves as executive committee member of Asia Federation of Biotechnology (AFOB).
Dr Christiane Herrmann
Dr Christiane Herrmann is a research scientist in the Department of Bioengineering at the Leibniz Institute for Agricultural Engineering Postdam-Bornim (ATB). She received her Ph.D. degree from the Humboldt University of Berlin (Germany) in 2010 and was awarded for the best doctoral graduation at the ATB (2009- 2011). From 2014 to 2015 she worked as a senior post-doctoral researcher in the Environmental Research Institute (ERI) at University College Cork (UCC) in Ireland. Her research focuses on anaerobic digestion, bioprocess engineering, bioenergy production, biomass supply and algae. She has published 22 peer-reviewed journal articles and has delivered more than 20 conference presentations. She is associate editor of the journal Renewable Energy and Environmental Sustainability and serves as reviewer for 18 peer-reviewed journals. Since 2012 she acts as a member of the guideline committee ‘VDI 4630 - Fermentation of organic materials’ of the Association of German Engineers.
Dr Ao Xia
Dr Ao Xia is an assistant professor in College of Power Engineering at Chongqing University (CQU). He completed his PhD research in 2013 in Energy Engineering from Zhejiang University (ZJU). He was awarded the Chu Kochen Scholarship for the highest honours at ZJU. He worked as a post-doctoral researcher in the Environmental Research Institute (ERI) at University College Cork (UCC) during 2014-2016. His research interests include algae, biofuels, biogas, fermentation and anaerobic digestion. He has published 36 papers in peer-reviewed journals and presented 6 keynote/invited lectures in international conferences. He serves as a referee on 10 peer-reviewed journals and has received the Top Reviewer Award from Bioresource Technology (2015).