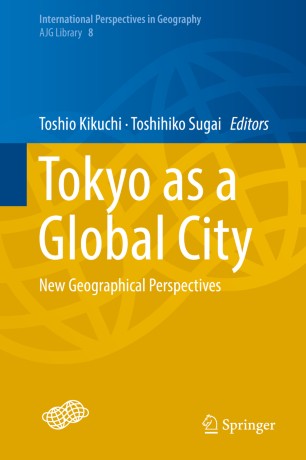 Tokyo as a Global City

This book examines Tokyo’s changes, current challenges, and future trends through a new kind of regional geography and serves as an important source of comprehensive information about the past, present, and future perspectives of Tokyo as a global city. Regional geography relies on two main approaches. The traditional one addresses each geographical element of a region individually and in depth, in a descriptive and static manner. The other focuses on a region’s specific phenomena and realities as a starting point and proceeds to identify the region’s constituent elements and their interactions, which it records and explains in a systematic and dynamic manner. The present volume, unlike its predecessors, relies on the dynamic approach and endeavors to offer a fresh view of Tokyo’s new and diverse geographical realities, analyzed in a holistic, systematic manner allowing identification of its specific features.
The book covers a broad range of topics including landform variations and volcanic activity, biodiversity concerns, transportation management, waste management, population issues, religious functions, and urban tourism, all of which facilitate understanding of the unique characteristics of Tokyo.  Extensive views from different fields of studies make the book a valuable reference to comprehend both the development of Tokyo into a global city and its sustainability.

Toshio KIKUCHI is a professor of geography and tourism science at the Graduate School of Urban Environmental Sciences, Tokyo Metropolitan University (TMU), Japan. He has been the leading organizer of the Department of Tourism Science at TMU since 2005 and the head of the department since 2016. He holds a doctorate in science from the Graduate School of Geoscience, the University of Tsukuba. He was an associate professor, Department of Geography, Gunma University (1984–1992), and an associate professor, Department of Geography, Graduate School of Science, TMU (1993– 2006), and he has been a professor in the Department of Tourism Science, TMU since 2007. He is a member of the Tourism Council and Eco-Top (Ecological Conservation Training of Personal Program) Committee of the Tokyo Metropolitan Government. He served as the chief editor of the Geographical Review of Japan from 2008 to 2012, the editor of the Journal of Geography (Chigaku Zasshi) from 2010 to 2016, and the chairperson of the Association of Japanese Geographers from 2015 to 2016. He received the Leading Professor Award at Tokyo Metropolitan University in 2014. Dr. Kikuchi specializes in agricultural and rural geography, while his academic interests cover wide phenomena such as rural tourism, sustainable rural systems, rural restructuring, land use–cover changes, ecotourism, the relationship between nature and human environments, and related topics. He has published many books, including Regional Conditions on Sustainable Rural Systems (2000, Nourin-Tokei-Kyoukai, Tokyo), Introduction of Tourism: Learning with Pleasure” (2008, Ninomiya-shoten, Tokyo), Nature-Based Tourism (2015, Asakura-shoten, Tokyo), and Culture-Based Tourism (2016, Asakura-shoten, Tokyo).

Toshihiko SUGAI is a professor in the Department of Natural Environmental Studies, Graduate School of Frontier Sciences, The University of Tokyo (UT), a position he has held since 2006. He received his BA in 1987 and his Ph.D. in 1994 from the Department of Geography, Faculty of Science, UT. During his career he has been an assistant professor in the Department of Human Geography, UT, 1993–1996; senior researcher, Active Fault Research Center, Geological Survey of Japan, 1996–1999; and associate professor, Department of Environmental Studies, Graduate School of Frontier Science, UT, 1999–2006. He has served as the editor of the Journal of Geography (Chigaku Zasshi) from 2007 to 2013, a steering committee member of the IGU Environmental Evolution Commission (2014–present), an editorial member of the AJG Library: International Perspectives in Geography (2014–present), and a member of the executive committee of the Japan Association for Quaternary Research (2015–present). Dr. Sugai is a physical geographer, and his research interests are Quaternary environmental changes and fluvial–tectonic geomorphology. Recent publications include Sugai T, Novenko EU (eds) (2015) ”Environment evolution and human activity in the late Quaternary” in the Geographical Review of Japan, and Haruyama S, Sugai T (eds) (2016)  Natural Disaster and Coastal Geomorphology (Springer).