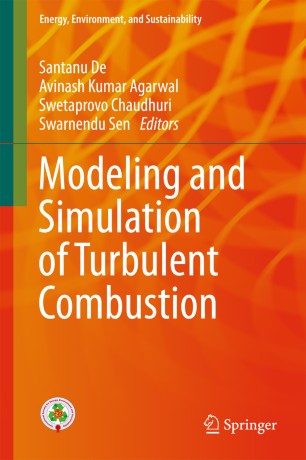 Modeling and Simulation of Turbulent Combustion

This book presents a comprehensive review of state-of-the-art models for turbulent combustion, with special emphasis on the theory, development and applications of combustion models in practical combustion systems. It simplifies the complex multi-scale and nonlinear interaction between chemistry and turbulence to allow a broader audience to understand the modeling and numerical simulations of turbulent combustion, which remains at the forefront of research due to its industrial relevance. Further, the book provides a holistic view by covering a diverse range of basic and advanced topics—from the fundamentals of turbulence–chemistry interactions, role of high-performance computing in combustion simulations, and optimization and reduction techniques for chemical kinetics, to state-of-the-art modeling strategies for turbulent premixed and nonpremixed combustion and their applications in engineering contexts.

Dr. Santanu De has been an Assistant Professor at the Department of Mechanical Engineering, IIT Kanpur since December 2014. He received a Bachelor of Engineering degree from the North Bengal University, Darjeeling, West Bengal in 2002, and an M.Tech. from the IIT Kanpur in 2004, both in Mechanical Engineering. He received his Ph.D. in Aerospace Engineering from the Indian Institute of Science, Bangalore in 2012. Prior to joining the IIT Kanpur, he served two years at Michigan Technological University, Michigan, USA as a postdoctoral research associate, and one year at the Institute of Combustion Technology (ITV), University of Stuttgart, Germany. He also worked as a scientist at the Liquid Propulsion Systems Center, Indian Space Research Organization, Thiruvananthapuram, from 2004 to 2005. His primary areas of research are numerical modeling of turbulent combustion, spray atomization and combustion, coal gasification and combustion.

Dr. Swetaprovo Chaudhuri has been an Assistant Professor at the Department of Aerospace Engineering, Indian Institute of Science, Bangalore, India since June 2013. Prior to this appointment he was a member of research staff at Princeton University, New Jersey, USA. He received his Ph.D. from the University of Connecticut, USA in 2010 and his B.E. from Jadavpur University, Kolkata (Calcutta), India in 2006. His research interests include fundamental and applied aspects of turbulent combustion, propulsion and functional droplets. He has authored/co-authored more than 70 articles disseminated through international journals and conference proceedings. Recently, he was selected as the recipient of the Young Scientist Medal by the Indian National Science Academy, New Delhi, India and as an Associate of the Indian Academy of Sciences, Bangalore, India. His earlier contributions have been recognized by the American Society of Mechanical Engineers, New York, USA and by the University of Connecticut.

Dr. Swarnendu Sen is a Professor at the Department of Mechanical Engineering, Jadavpur University, Kolkata, India, where he has been teaching since November 1989. He earned his Bachelor and Master’s in Mechanical Engineering as well as a Ph.D. (Engineering) from Jadavpur University. He worked at the University of Illinois at Chicago, Illinois, USA and Virginia Tech, Virginia, USA as a Visiting Research Scholar. He has also worked at the Technical University of Munich, Germany as a DAAD Fellow. His research interests include fundamental and applied aspects of reacting and multiphase flows, heat transfer augmentation and carbon nano-structure synthesis. He has authored/co-authored more than 200 articles disseminated through top journals and conference proceedings.