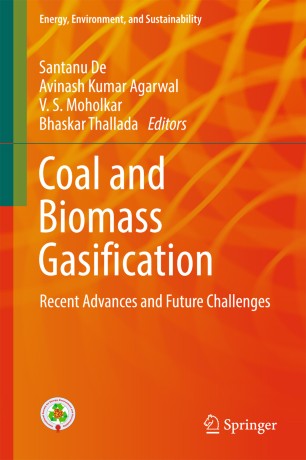 This book addresses the science and technology of the gasification process and the production of electricity, synthetic fuels and other useful chemicals. Pursuing a holistic approach, it covers the fundamentals of gasification and its various applications. In addition to discussing recent advances and outlining future directions, it covers advanced topics such as underground coal gasification and chemical looping combustion, and describes the state-of-the-art experimental techniques, modeling and numerical simulations, environmentally friendly approaches, and technological challenges involved.

Written in an easy-to-understand format with a comprehensive glossary and bibliography, the book offers an ideal reference guide to coal and biomass gasification for beginners, engineers and researchers involved in designing or operating gasification plants.

Dr. Santanu De has been an Assistant Professor at the Department of Mechanical Engineering, IIT Kanpur since December 2014. He received his Bachelor of Engineering from North Bengal University, Darjeeling, West Bengal in 2002, and his M.Tech. from the IIT Kanpur in 2004, both in Mechanical Engineering. He received his Ph.D. in Aerospace Engineering from the Indian Institute of Science, Bangalore in 2012. Prior to his joining the IIT Kanpur, he served two years at Michigan Technological University, Michigan, USA as a postdoctoral research associate, and one year at the Institute of Combustion Technology (ITV), University of Stuttgart, Germany. He also worked as a scientist at the Liquid Propulsion Systems Center, Indian Space Research Organization, Thiruvananthapuram, Kerala. His primary areas of research are numerical modeling of turbulent combustion, spray atomization and combustion, coal gasification and combustion.

Dr. V. S. Moholkar is a Professor of Chemical Engineering and Head of the Center for Energy at the IIT Guwahati. He received his Bachelor’s (1993) and Master’s (1996) degrees in Chemical Engineering from the Institute of Chemical Technology, Mumbai, followed by a Ph.D. from the University of Twente, the Netherlands in 2002. He also headed the Department of Chemical Engineering at the IIT Guwahati from 2012 to 2015. His main research interests are sonochemistry, cavitation assisted physical, chemical and biological processing, and thermo- and biochemical routes to biofuels. He has published more than 120 papers in prominent international journals and holds two patents on hydrodynamic cavitation reactors for biomass pretreatment and bioalcohol synthesis. He is an elected Fellow of the Royal Society of Chemistry (FRSC), a senior member of the AIChE, a Chartered Member of the Institution of Chemical Engineers, UK, and a Chartered Engineer of the Engineering Council, UK.

Dr Bhaskar Thallada, FBRS, FRSC is a Principal Scientist and Head of the Thermo-catalytic Processes Area, Biofuels Division (BFD) at the CSIR-Indian Institute of Petroleum, Dehradun, India. He received his Ph.D. from the CSIR-Indian Institute of Chemical Technology (IICT), Hyderabad, and subsequently spent 7 years as a postdoc and member of faculty at Okayama University, Japan. He has published more than 120 articles and 18 book chapters, and holds 13 patents. He serves on the editorial board of five international journals and has edited three books. He received the Distinguished Researcher Award from the AIST, Japan (2013) and the Most Progressive Researcher Award from the FSRJ, Japan (2008).