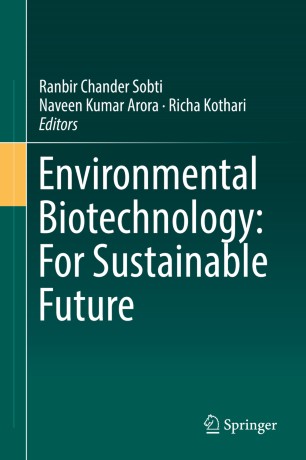 Environmental sustainability is one of the biggest issues faced by the mankind. Rapid & rampant industrialization has put great pressure on the natural resources. To make our planet a sustainable ecosystem, habitable for future generations & provide equal opportunity for all the living creatures we not only need to make corrections but also remediate the polluted natural resources. The low-input biotechnological techniques involving microbes and plants can provide the solution for resurrecting the ecosystems. Bioremediation and biodegradation can be used to improve the conditions of polluted soil and water bodies. Green energy involving biofuels have to replace the fossil fuels to combat pollution & global warming. Biological alternatives (bioinoculants) have to replace harmful chemicals for maintaining sustainability of agro-ecosystems. The book will cover the latest developments in environmental biotech so as to use in clearing and maintaining the ecosystems for sustainable future.

Dr Naveen Kumar Arora, PhD, Microbiology, Associate Professor in Department of Environmental Microbiology, Babasaheb Bhimrao Ambedkar University (A Central University), Lucknow, Uttar Pradesh, India is a renowned researcher in the field of Environmental Microbiology and Biotechnology. His specific area of research is rhizosphere biology and PGPRs and has completed 07 research projects. He has more than 50 research papers published in premium international journals and several articles published in magazines and dailies. He is editor of 06 books, published by Springer. He is member of several national and international societies, in editorial board of 04 journals and reviewer of several international journals. He has delivered lectures in conferences and seminars around the globe. He has a long standing interest in teaching at the PG level and is involved in taking courses in bacteriology, microbial physiology environmental microbiology, agriculture microbiology and industrial microbiology. He has been advisor to 118 post graduate and 08 doctoral students. Recently he was awarded for excellence in research by the Honorable Governor of Uttar Pradesh. Although an academician and researcher by profession he has a huge obsession for the wildlife and its conservation and has authored a book, Splendid Wilds. He has a dedicated website www.naveenarora.co.in for the cause of wildlife and environment conservation.

Professor Sobti has been proactively involved in cancer biology, with a focus on finding out novel tumour markers for cancer detection, and is currently engaged in the development of whole organ by tissue/organ culture through custom designed de cellularization protocol. His intense scientific contributions have resulted in around 300 high impact research publications with more than 2800 citations and h-factor of 30, 40 books and 23 sponsored Research Projects. He is fellow of leading National and International Academies of Science and is associated with many other Academic Associations and Institutions in the domain of higher education and research in India and abroad and was General President of Indian Science Congress Association in 2014.

As a protean public intellectual, He is a well accepted leader in the domain of science. In recognition of his enormous contribution to higher education, he has been bestowed with a large number of prestigious awards and medals which adorn his academic and professional career, and include, the INSA Young Scientist Medal (1978). UGC Career Research Award, Punjab Rattan Award, JC Bose oration Award, besides many other medals and prestigious awards. The Government of India bestowed upon him the honour of “PADMA SHRI” in 2009 by way of rightfully acknowledging his great contributions to higher education in India. On 2nd July, 2016, he was also honoured with ‘Bharat Gaurav’, Life Time Achievement Award at the House of Commons, British Parliament, London, U.K.

Professor Sobti, not only excels in creating academic atmosphere, but is also equally steadfast and loyal towards environment and society. He has been instrumental in making a number of documentaries for making public aware about societal ailments and their possible remedies. Owing to his exceptional contributions, and societal commitments, the Governments of India has conferred upon him the honorary rank of COLONEL

Professor Sobti has always gone beyond the call of duty in every arena, be it for his innovative ideas, encouragement, and his speedy actions aimed at comprehensive development of the society. He encompasses the best of tradition and modernity both to engineer a dynamic today-which is of vital significance to create a great future. He is an epitome of kindness, hard work and solidarity, an active researcher and a perfect protagonist in popularization of science and can carry along a large community towards a developed and progressive Nation.

Dr. Richa Kothari, M.phil and Ph.D. in Energy and Environment, working as an Associate Professor at Department of Environmental Sciences at Central University of Jammu, Samba, Jammu (J&K),India.. She is also awarded by one of the prestigious Indo-US Science and Technology Forum (IUSSTF) for Water Advanced Research and Innovation Fellowship program in year 2016 at Robert B. Daugherty Water for Food Institute, University of Nebraska-Lincoln, Lincoln, NE, USA. She has guided more than 30 M.Sc. and M.Tech students and 02 doctoral students. She has more than 60 articles in reputed peer reviewed international and national journals with high impact factors, chapters in edited books. She is also a reviewer of well-reputed scopus journals. She is also a part of editorial teams of many national and international journals. His research interests are bio-energy production approaches, low-cost wastewater treatment technologies.

Her other publications are in form of books :