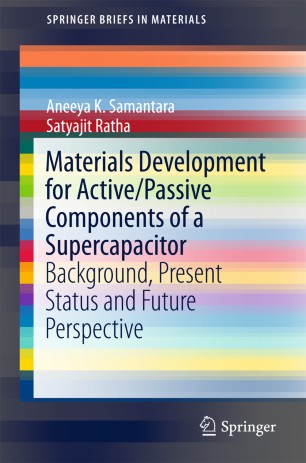 Materials Development for Active/Passive Components of a Supercapacitor

This brief deals with various forms of supercapacitors starting from traditional carbon based supercapacitors to advanced next generation hybrid supercapacitors. The primary focus is to investigate the successive evolution in the core components of a typical supercapacitor which will bring significant observations regarding their feasibility and overall impact on the charge storage capacity so as to reach at par with the current battery technology. The authors present a critical review of the current collectors, electrode materials and electrolytic components which have distinctive impact on both the power and energy density of a supercapacitor. Emerging trends in the fabrication of hybrid supercapacitor technology bring together the exceptional power density of a double layer capacitor and energy density of a rechargeable battery, which promises a brighter future for the electrical energy storage system.

Dr. Aneeya Kumar Samantara has pursued his Ph.D. at CSIR-Institute of Minerals and Materials Technology, Bhubaneswar, Odisha, India. Before joining the Ph.D. he has completed the Master of Philosophy (M.Phil.) in Chemistry from Utkal University and Master in Science in Advanced Organic Chemistry at Ravenshaw University, Cuttack, Odisha. Dr. Aneeya’s research interest includes the synthesis of metal chalcogenides and graphene composites for energy storage and conversion application. To his credit, he has authored in 16 peer reviewed international journals and two book chapters.

Mr. Satyajit Ratha is a Project Assistant at the School of Basic Sciences, Indian Institute of Technology Bhubaneswar, India. Prior to joining IIT Bhubaneswar, he received his Bachelor of Science, First Class Honours from Utkal University, in 2008 and Master of Science from Ravenshaw University in 2010. Satyajit’s research interests include two dimensional semiconductors, nanostructure synthesis, applications, energy storage devices and supercapacitors. He has authored and co-authored about 16 peer reviewed international journals.