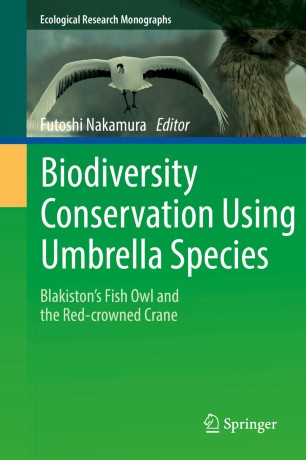 This book focuses on Blakiston’s fish owl and the red-crowned crane as umbrella species. Healthy river, riparian and wetland ecosystems are necessary to maintain the populations of the two species. Both species have been revered by people since ancient times, but both are currently listed as endangered because of their small population sizes. The population decline of the two species can be mainly attributed to the degradation of the natural riparian and wetland habitats, which is associated with land use development.

The populations of the two species are now recovering in Japan due to recent conservation and reproduction efforts, but the genetic diversity of the two species are still low due to previous bottleneck effects. To develop conservation and dispersal plans to establish the species over the East Asian mainland and on the island of Hokkaido, basic information, such as their regional distribution, genetic diversity, food availability, reproductive traits, and nesting, breeding, rearing, and commuting habitat, is essential. The intensive, collaborative studies conducted in Japan and Russia has clarified the status quo and the ecology of the two species.
This is the first book that comprehensively compiles the above information for the mainland and island populations. In addition, it verifies their suitability as umbrella species of an ecosystem and the possibility of their future population expansion, taking into account changes in land use in Hokkaido, which is about to experience a dramatic decline in human population.
As such, the book provides valuable information for students who wish to learn about these beautiful symbolic creatures, for NGOs engaged in conservation activities, and for managers who are involved in creating conservation plans and implementing restoration projects.