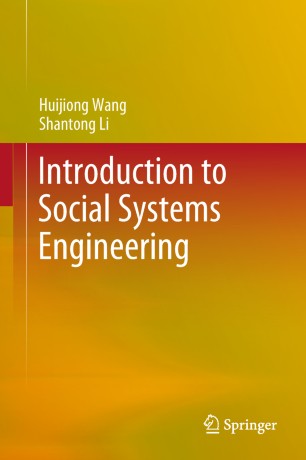 This book integrates the basic theories (GST and Parson’s AGIL framework), applying them to the components of social systems, state-run and business firms. China’s development experience offers a valuable case study that can provide readers deeper insights into this comparatively young discipline, and into China. Though the discipline of systems engineering and its application to hardware engineering system are well established, social systems engineering is an emerging discipline still being explored. This book may be the first English-language publication on this promising subject.

Huijiong Wang has 33 years of working experience in the design, planning and operation of electrical power systems (generation, transmission, distribution and utilization) in China. His last position in the engineering field was Deputy Chief Engineer of the Bureau of Electricity, Yunnan Province. He published a book titled Introduction to Systems Engineering (Chinese Version: two volumes) in the 1980s.

He became a senior research fellow of the Chinese Academy of Social Science through open examination in 1980, and served as a consultant at UNIDO in 1981. Later, he was transferred to the newly established Techno-Economic Research Center (which later became the Development Research Center) of the State Council and became one of the leading group members. He has spearheaded several major national and international projects, such as Comprehensive Planning of ShanXi Heavy Chemical and Energy basis 1980-2000, China by the Year 2000 (National First Class S&T Progress Award 1988), Industrial Restructuring and Industrial Policies (A joint research project with the World Book), and Integrated Study of China’s Development and Reform (A grant from the UNDP (ca. 3 million USD) from 1988-1991). He has been Vice President of the DRC Academic Committee since the 1990s. He has also served as a local consultant to the World Bank, ADB, ESCAP, OECD etc.

Professor Shantong Li is a Senior Research Fellow and former Director General of the Department of Development Strategy and Regional Economy of Development Research Center (DRC) of the State Council (People’s Republic of China). She was a member of the National Committee of CPPCC (Chinese People’s Political Consultative Conference) and currently holds professorships at both Peking University and Tsinghua University. Professor Li has participated in numerous joint development projects with the World Bank, UNDP, UNIDO, OECD and the ADB. She has conducted systematic research on issues concerning China’s medium-term and long-term development, with a particular focus on regional economic and social development. Among many of her accomplishments Professor Li has contributed to the Development Strategy and Policies for 13th Five-Year Plan and towards 2030.  She has created an applicable CGE model, the DRC-CGE model of China, and has also trained a team of scholars working in this field. This model has been applied in many research projects both domestically and abroad. She won the Fudan Management Excellence Award in 2014. She is Director of the project “Urbanization development path selection and management research of China in the new stage, key project of the National Natural Science Foundation of China” (project no. 71133003) and also joined the project “Sustainable Urbanisation in China: Historical and Comparative Perspectives, Mega-trends towards 2050” (EU Project Number FP7－266941).