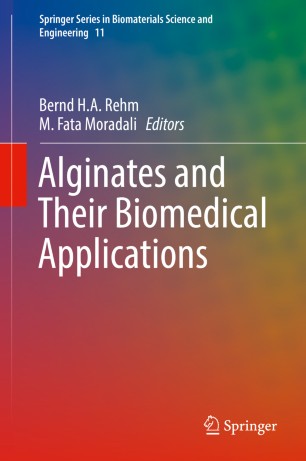 Alginates and Their Biomedical Applications

This book presents a comprehensive review of the latest advances in developing alginate-based biomaterials and derivatives as well as their biomedical and pharmaceutical applications. It covers the physiochemical properties of alginates, production and formulation methods, derivatizations and characterization methods, the fundamental work on optimizing alginate polymers for defined biomedical purposes as well as the scope and effectiveness of their applications in medicine and therapeutic approaches. The book brings together new concepts and advances in harnessing alginate-based biomaterials in combination with applied technological advances to tailor their applications to medical needs. The contributions by leading academics, clinicians and researchers not only cover the fundamentals, but also open new avenues for meeting future challenges in research and clinical applications.

Bernd Rehm received his MSc and PhD degrees (microbiology) from the Ruhr University Bochum, Germany, in 1991 and 1993, respectively. He continued as a postdoc at the Department of Microbiology and Immunology at the University of British Columbia, Canada. From 1996 to 2003, he was a research group leader at the Institute of Molecular Microbiology and Biotechnology at the University of Münster, Germany, where he also completed his habilitation. In 2003 he was appointed as Associate Professor and in 2005 promoted to Full Professor/Chair of Microbiology at Massey University in New Zealand. From 2013 to 2016 he was principal investigator of the Centre of Research Excellence (New Zealand) at the MacDiarmid Institute of Advanced Materials and Nanotechnology. He was recently appointed as director of the Centre for Cell Factories and Biopolymer at Griffith University (Griffith Institute for Drug Discovery, Australia), and is the founder and chief technology officer of the biotechnology start-up company PolyBatics Ltd.

He is editor-in-chief and editor of 5 scientific journals as well as an editorial board member of 10 scientific journals and the sole editor of 5 books. He has authored over 180 scientific publications, and holds more than 30 patents. His R&D interests are in the microbial production of polymers and their applications. His recent studies focused on the use of engineered microorganisms to produce functionalized nano-/micro-structures for applications in diagnostics, enzyme immobilization, and antigen delivery.

Dr. Fata Moradali received his MSc degree from Tehran University and his PhD degree in molecular microbiology and genetics from Massey University, New Zealand. He spent several years in Prof. Bernd Rehm`s laboratory investigating alginate biosynthesis in the model organism Pseudomonas aeruginosa. He then moved to the Department of Oral Biology, Florida University, USA, to join Dr. Mary Ellen Davey`s laboratory to continue cutting-edge research in the field of human oral biology. Dr. Moradali has contributed to our understanding of the molecular mechanism of alginate biosynthesis in P. aeruginosa and his research has provided new insights into the molecular mechanism of alginate polymerization/modification and its activation by bacterial second messenger cyclic di-GMP. By employing genetic engineering in his research, he demonstrated the production of various alginates from P. aeruginosa for the production of tailor- made alginate. He has extensive expertise in microbial genetics and physiology with respect to production of microbial compounds.