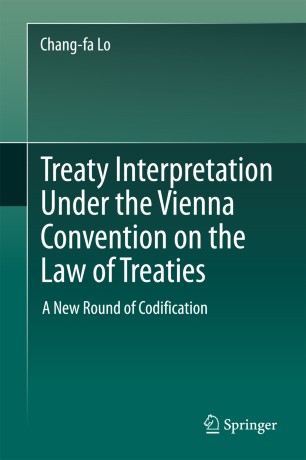 Treaty Interpretation Under the Vienna Convention on the Law of Treaties

A New Round of Codification

Chang-fa Lo has been Justice of the Constitutional Court of the ROC (Taiwan) since October 2011. Prior to his current judicial position, he was the Chair Professor and Lifetime Distinguished Professor at National Taiwan University (NTU); Dean of NTU College of Law; Director of Asian Center for WTO and International Health Law and Policy of NTU College of Law (ACWH); Director of Center for Ethics, Law and Society in Biomedicine and Technology of NTU; Commissioner of Taiwan’s Fair Trade Commission; Commissioner of Taiwan’s International Trade Commission; and legal advisor for Taiwan’s GATT/WTO accession negotiations. In his capacity as the Director of ACWH, Professor Lo launched two English journals, namely, the Asian Journal of WTO and International Health Law and Policy and the Contemporary Asia Arbitration Journal (CAA) in 2006 and 2008, respectively. In his tenure as Dean of NTU College of Law, he also launched an English journal, the NTU Law Review. Prior to his teaching career, he practiced law in Taipei. He received his SJD degree from Harvard University Law School in 1989. He was appointed by the WTO as a panelist for DS332      Brazil—Measures Affecting Imports of Retreaded Tyre in 2006, DS468 Ukraine—Definitive Safeguard Measures on Certain Passenger Cars in 2014, and as a member of the Permanent Group of Experts under the SCM Agreement of WTO in 2008. He is also the chairman of the Asia WTO Research Network (AWRN) since 2013. He is the author of 13 books (including the current one) and the editor of 6 books, and has authored about 100 journal papers and book chapters.