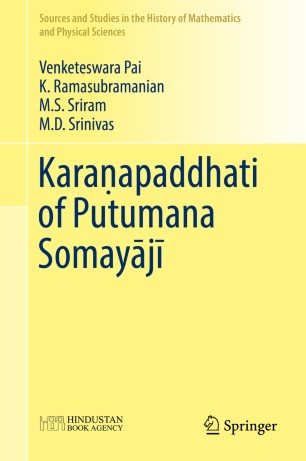 Karaṇapaddhati of Putumana Somayājī is an important text of the Kerala School of astronomy and mathematics, probably composed in the 16th century. In the Indian astronomical tradition, the karaṇa texts are essentially computational manuals and they often display a high level of ingenuity in coming up with simplified algorithms for computing planetary longitudes and other related quantities. Karaṇapaddhati, however, is not a karaṇa text. Rather, it discusses the paddhati or the rationale for arriving at suitable algorithms that are needed while preparing a karaṇa text for a given epoch. Thus the work is addressed not to the almanac maker but to the manual maker.
Karaṇapaddhati presents the theoretical basis for the vākya system, where the true longitudes of the planet are calculated directly by making use of certain auxiliary notions such as the khaṇḍa, maṇḍala and dhruva along with tabulated values of changes in the true longitude over certain regular intervals which are expressed in the form vākyas or mnemonic phrases. The text also discusses the method of vallyupasaṃhāra which is essentially a technique of continued fraction expansion for obtaining optimal approximations to the rates of motion of planets and their anomalies, involving ratios of smaller numbers. It also presents a new fast convergent series for π which is not mentioned in the earlier works of the Kerala School. As this is a unique text presenting the rationale behind the vākya system and the computational procedures used in the karaṇa texts, it would serve as a useful companion for all those interested in the history of astronomy. The authors have provided a translation of the text followed by detailed notes which explain all the computational procedures, along with their rationale, by means of diagrams and equations.