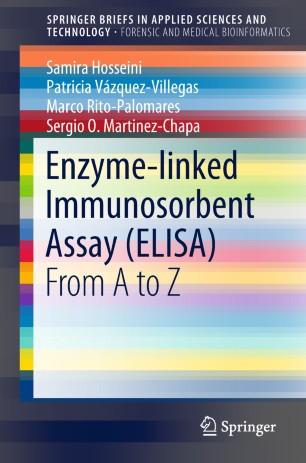 From A to Z

This book offers comprehensive information on all aspects of ELISA, starting with the fundamentals of the immune system. It also reviews the history of analytical assays prior to the advent of ELISA (enzyme-linked immunosorbent assay) and addresses the materials of choice for the fabrication of the platforms, possible biomolecular interactions, different protocols, and evaluation parameters. The book guides readers through the respective steps of the analytical assay, while also familiarizing them with the possible sources of error in the assay. It offers detailed insights into the immobilization techniques used for protein attachment, as well as methods for evaluating the assay and calculating the key parameters, such as sensitivity, specificity, accuracy and limit of detection. In addition, the book explores the advantages and shortcomings of the conventional ELISA, as well as various approaches to improving its performance. In this regard, merging and integrating other technologies with widely known ELISAs have opened new avenues for the advancement of this immunoassay. Accordingly, the book provides cutting-edge information on integrated platforms such as ELISpot, plasmonic ELISAs, sphere-/bead-based ELISAs, paper-/fiber-based ELISAs and ELISA in micro-devices.

Dr. Samira Hosseini obtained her B.Sc. degree in Applied Physics, her M.Sc. degree in Polymer Chemistry and her PhD degree in Biomedical Engineering. Currently, she is working as a Postdoctoral Researcher at the School of Engineering and Sciences, Tecnológico de Monterrey, Mexico. She is the author/co-author of more than 15 ISI indexed scientific publications, 12 book chapters and the inventor/co-inventor of 4 Intellectual properties. She is a member of the Mexican National System of Researchers. Her main areas of research are surface engineering, interface science, bioanalytical assays and polymeric materials.

Dr. Patricia Vázquez-Villegas obtained her Bachelor’s degree in Food Sciences Engineering program in 2008 and her PhD in Engineering Sciences from Tecnológico de Monterrey, Monterrey, México in 2013 majoring in Biotechnology. She made a one-year internship in 2012 at the University of British Columbia, Vancouver, Canada under the supervision of Dr. Charles A. Haynes. Since 2014 she holds a Postdoc position in Tecnológico de Monterrey where she is working in the development and application of platforms for purification and detection of different kinds of biomarkers. Dr. Vázquez is the author/co-author of 8 ISI indexed scientific publications, 1 book chapter and the inventor/co-inventor of 4 intellectual properties. She is a member of the Mexican National System of Researchers. Her main contribution had been in the field of continuous recovery of biomolecules using liquid–liquid extraction.Professor Rito-Palomares obtained his PhD in Chemical Engineering from The University of Birmingham, United Kingdom in 1995. Following a sabbatical in the Department of Chemical Engineering at the University of Cambridge, United Kingdom (2001)., Prof. Rito-Palomares is currently the Director of the Biotechnology Centre and a Full Professor at Tecnologico de Monterrey, Mexico. He is a member of the Mexican Academy of Sciences, scientific committee of the International Foundation for Science (IFS, Sweden) as well as Mexican Research Council. He is the author/co-author of more than 100 ISI indexed scientific publications, 4 book chapters and inventor/co-inventor of 5 Intellectual properties that present his research work in the Bio-separation field. His main research contributions have been in the areas of biochemical recovery of biological products, and production, characterization and recovery of chemically modified proteins and the potential purification of stem cells. Sergio O. Martinez is Professor of the Electrical and Computer Engineering Department at Tecnológico de Monterrey, Monterrey Campus; and researcher and chair of the Sensors and Devices area of the National School of Engineering and Sciences at the same Institute. Sergio O. Martínez received the BS degree in Electronics and Communications Engineering and the MS degree in Control Engineering both from Tecnológico de Monterrey, Campus Monterrey, Mexico in 1983 and 1985, respectively. He obtained a MS degree in Electronics from Philips International Institute, Eindhoven, Netherlands in 1990; and the PhD degree in Microelectronics from National Polytechnic Institute of Grenoble, France in 2002. Prof. Martínez-Chapa is a member of the Mexican National System of Researchers since 2004 as well as member of the Mexican Academy of Sciences since 2010. His recent research activities, focused on Micro/Nanotechnologies, include Microfabrication Processes for Particle Manipulation Devices, Electrokinetically driven Microdevices for Manipulation of Suspended Particles in Fluidic Media, and Modeling and Design of surface plasmon resonance (SPR)-based Biosensing Platforms. He has authored/co-authored 75 peer-reviewed publications, 7 book chapters and the inventor/co-inventor of 2 granted intellectual properties.