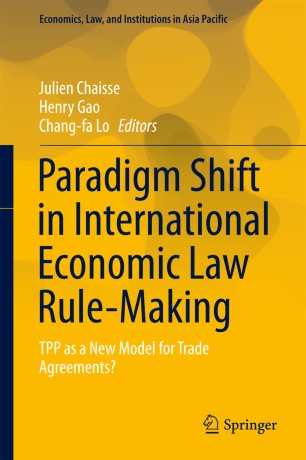 TPP as a New Model for Trade Agreements?

The TPP  was negotiated among 12 economically diverse countries, including some most highly developed and rich countries (i.e., the United States, Japan, Australia, Canada, New Zealand, and Singapore), some newly industrialized countries (i.e., Mexico and Malaysia), and some less-developed countries (i.e., Peru, Chile, and Vietnam). A new paradigm created in this context is that countries with vastly different economic developments can actually agree on a set of very high standards to regulate their economic activities, to liberalize their trade, and to protect intellectual property  and foreign investment. The contents of the TPP also reflect its status of being a “new paradigm” as the “21st-Century Trade Agreement”  and being a pioneer in rule making in many key regulatory areas. These include not only the improved and enhanced rules on traditional issues already covered by the WTO , such as goods, services, and IP rights, but also the carefully designed rules in areas that have never been addressed in the WTO or comprehensively covered in other FTAs , such as state-owned enterprises, electronic commerce, and labor and environmental issues. Although the United States has withdrawn from the TPP, the remaining countries are still putting efforts into establishing a TPP without the United States or a TPP with China. Economically speaking, the current 11 parties account for about 20 % of the global economy. If such agreement is put into force, there will be significant implications for the region, for the multilateral system, and even for other FTAs. The book addresses the potential of the TPP to change the ways trade and investments are conducted and argues for its potential to be the start of an international trade/economic law revolution. The book elaborates the relationship between the TPP and other existing trade agreements such as the WTO and other FTAs and explains how the TPP is to deal with traditional and new issues. Taken together, the authors argue that the implications of the TPP go beyond its current membership. It is hoped that the book will make an important contribution to the field of international economic law.

Editors
Julien Chaisse is Professor at The Chinese University of Hong Kong (CUHK), Faculty of Law. He is an award-winning scholar of international law with a special focus on the regulation and development of economic globalization. His teaching and research include international trade/investment law, international taxation, law of natural resources, and Internet law. Prior to joining CUHK in 2009, Dr. Chaisse was a senior research fellow at the World Trade Institute (Switzerland). He also held an appointment as lecturer at elite school Sciences Po Aix (France) and served as a diplomat at the Embassy of France in New Delhi (India).
Dr. Chaisse is frequently invited to lecture at many academic institutions and leading universities around the world, including Columbia University (U.S.), University of Oxford (U.K.), Melbourne University (Australia), Tokyo University (Japan), and Tsinghua University (China). Dr. Chaisse has published numerous well-regarded and widely-cited books and articles, such as "The Regulation of Global Water Services Market," Cambridge University Press (2017); "International Economic Law and Governance," Oxford University Press (2016); Shareholder Protection Reloaded,  Stanford Journal of International Law (2016); Navigating the Expanding Universe of International Treaties on Foreign Investment, Journal of International Economic Law (2015); Maintaining the WTO's Supremacy in the International Trade Order, Journal of International Economic Law (2013); and Promises and Pitfalls of the European Union Policy on Foreign Investment, Journal of International Economic Law (2012).
In recognition of his outstanding academic performance, Dr. Chaisse received the CUHK Vice-Chancellor's Exemplary Teaching Award in 2015 and the CUHK Research Award in 2012. Dr. Chaisse has held the appointment of Director of the Centre for Financial Regulation and Economic Development at CUHK Law since 2013, and has established forward-looking legal projects and events at CUHK, including the series of "Asia FDI Forum," which has become the most prominent conference on foreign investment regulation in Asia.
In addition to his professorship, Dr. Chaisse is a well-experienced arbitrator and a leading consultant to international organizations, governments, multinational law firms, and private investors. He is also member of some of the world's foremost organizations, including the World Economic Forum's International Trade and Investment Council and the Internet Corporation for Assigned Names and Numbers (ICANN) in which Dr. Chaisse serves on the Working Group on gTLDs' rights protection mechanisms review and the Accountability and Transparency Review  program.
Henry Gao is Associate Professor of law at Singapore Management University and Dongfang Scholar Chair Professor at Shanghai Institute of Foreign Trade. With law degrees from three continents, he started his career as the first Chinese lawyer at the WTO Secretariat. Before moving to Singapore in late 2007, he taught law at University of Hong Kong, where he was also the Deputy Director of the East Asian International Economic Law and Policy Program. He has taught at the IELPO program in Barcelona and the Academy of International Trade Law in Macau, and was the Academic Coordinator to the first Asia-Pacific Regional Trade Policy Course officially sponsored by the WTO. Widely published on issues relating to China and WTO, Prof. Gao’s research has been featured in CNN, BBC, The Economist, Wall Street Journal and Financial Times. He has advised many national governments as well as the WTO, World Bank, Asian Development Bank, APEC and ASEAN on trade issues. He sits on the Advisory Board of the WTO Chairs Program, which was established by the WTO Secretariat in 2009 to promote research and teaching on WTO issues in leading universities around the world. He is also a member of editorial board of Journal of Financial Regulation, which was launched by Oxford University Press in 2014.
Chang-fa Lo has been Justice of the Constitutional Court of the ROC (Taiwan) since October 2011. Prior to his current judicial position, he was the Chair Professor and Lifetime Distinguished Professor at National Taiwan University (NTU); Dean of NTU College of Law; Director of Asian Center for WTO and International Health Law and Policy of NTU College of Law (ACWH); Director of Center for Ethics, Law and Society in Biomedicine and Technology of NTU; Commissioner of Taiwan’s Fair Trade Commission; Commissioner of Taiwan’s International Trade Commission; and legal advisor for Taiwan’s GATT/WTO accession negotiations. In his capacity as the Director of ACWH, Professor Lo launched two English journals, namely, the Asian Journal of WTO and International Health Law and Policy and the Contemporary Asia Arbitration Journal (CAA) in 2006 and 2008, respectively. In his tenure as Dean of NTU College of Law, he also launched an English journal, the NTU Law Review. Prior to his teaching career, he practiced law in Taipei. He received his SJD degree from Harvard University Law School in 1989. He was appointed by the WTO as a panelist for DS332       Brazil — Measures Affecting Imports of Retreaded Tyre in 2006, DS468 Ukraine — Definitive Safeguard Measures on Certain Passenger Cars in 2014, and as a member of the Permanent Group of Experts under the SCM Agreement of WTO in 2008. He is also the chairman of the Asia WTO Research Network (AWRN) since 2013. He is the author of 12 books and the editor of 6 books, and has authored about 100 journal papers and book chapters.