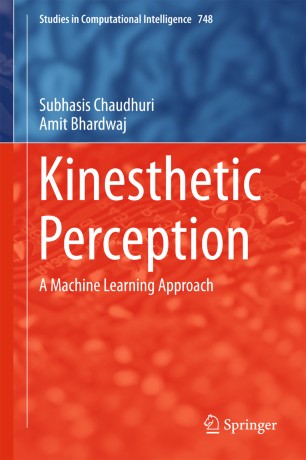 This book focuses on the study of possible adaptive sampling mechanisms for haptic data compression aimed at applications like tele-operations and tele-surgery. Demonstrating that the selection of the perceptual dead zones is a non-trivial problem, it presents an exposition of various issues that researchers must consider while designing compression algorithms based on just noticeable difference (JND). The book begins by identifying perceptually adaptive sampling strategies for 1-D haptic signals, and goes on to extend the findings on multidimensional signals to study directional sensitivity, if any. The book also discusses the effect of the rate of change of kinesthetic stimuli on the JND, temporal resolution for the perceivability of kinesthetic force stimuli, dependence of kinesthetic perception on the task being performed, the sequential effect on kinesthetic perception, and, correspondingly, on the perceptual dead zone. Offering a valuable resource for researchers, professionals, and graduate students working on haptics and machine perception studies, the book can also support interdisciplinary work focused on automation in surgery.

Prof. Subhasis Chaudhuri received his B.Tech. Degree in Electronics and Electrical Communication Engineering from the Indian Institute of Technology Kharagpur, Kharagpur in 1985. He received his M.Sc. and Ph.D. degrees, both in Electrical Engineering, from the University of Calgary, Canada, and the University of California, San Diego, respectively. He joined the Department of Electrical Engineering at the Indian Institute of Technology Bombay, Bombay in 1990 as an Assistant Professor and is currently serving as the KN Bajaj Chair Professor. He has also served as the Head of the Department, the Dean (International Relations) and a Deputy Director. He has also served as a Visiting Professor at the University of Erlangen-Nuremberg, the Technical University of Munich and the University of Paris XI. He is a Fellow of the science and engineering Academies in India. He is a recipient of the Dr. Vikram Sarabhai Research Award (2001), the Swarnajayanti Fellowship (2003), the S.S. Bhatnagar Prize in engineering sciences (2004) and the J.C. Bose National Fellowship (2008). He is a co-author of the books ‘Depth from Defocus: A Real Aperture Imaging Approach’, ‘Motion-Free Super-Resolution’, and ‘Blind Image Deconvolution: Methods and Convergence’, all published by Springer, New York (NY). He is currently an associate editor for the journal International Journal of Computer Vision. His primary areas of research include image processing and computational haptics.
Amit Bhardwaj received his B.Tech. and M.E. degrees in Electronics and Communication Engineering from the YMCA Institute of Engineering, Faridabad, Haryana, and the Delhi College of Engineering, Delhi, in 2009 and 2011, respectively. He has recently completed his Ph.D in Electrical Engineering at the Indian Institute of Technology Bombay, Bombay, and is currently an Alexander von Humboldt Fellow at the Technical University of Munich. His current research areas include signal processing, haptics, kinesthetic perception, haptic data communication and applications of machine learning.