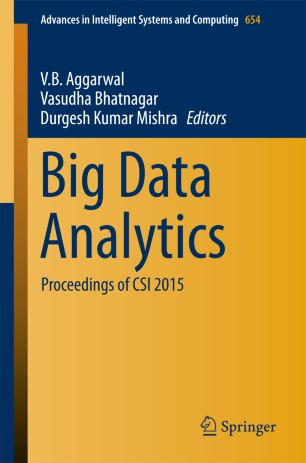 Part of the Advances in Intelligent Systems and Computing book series (AISC, volume 654)

This volume comprises the select proceedings of the annual convention of the Computer Society of India. Divided into 10 topical volumes, the proceedings present papers on state-of-the-art research, surveys, and succinct reviews. The volumes cover diverse topics ranging from communications networks to big data analytics, and from system architecture to cyber security. This volume focuses on Big Data Analytics. The contents of this book will be useful to researchers and students alike.

From 1981 to 88, Dr. Vijay B. Aggarwal was the Founder Head, Department of Computer Science, University of Delhi, India, where he introduced the 3-Year postgraduate (PG) Programme, Master of Computer Applications (MCA), from 1982 to 1985. In 1973, he was awarded his Ph.D. by the University of Illinois, Urbana, USA. He continued his research work in the areas of Super Computers and Array Processors. In the USA, he taught for seven years as a faculty member at three universities. As a life member of the Computer Society of India (CSI), he has held various offices at the Delhi Chapter, including chapter vice-chairman and chairman, since 1979. In February 2014, he received the prestigious “Chapter Patron Award 2013” for Delhi Chapter by the CSI awards committee. Dr. Aggarwal has authored more than 18 Computer Publications, which are very popular among school students.
Prof. Vasudha Bhatnagar is a Professor at the Department of Computer Science, University of Delhi
, India. She is actively involved in research in the field of Knowledge Discovery and Data Mining (KDD). Her broad area of interest is Intelligent Data Analysis. She is particularly interested in developing process models for Knowledge Discovery in Databases and data mining algorithms. Her further interests include problems pertaining to modelling of changes in discovered knowledge in evolving (streaming) data sets, handling user subjectivity in KDD, projected clustering, outlier detection, classification and cluster ensembles. She is currently studying graphs as tool for modelling biology problems and texts.
Dr. Durgesh Kumar Mishra is a Professor (CSE) and Director of the Microsoft Innovation Centre at Shri Aurobindo Institute of Technology, Indore, India. He has 24 years of teaching and research experience and has published over 100 research papers. He is a Senior Member of IEEE and Chairman, Computer Society of India (CSI) Division IV. He has held positions including Chairman, IEEE MP-Subsection and Chairman, IEEE Computer Society, Bombay Chapter. He has delivered invited talks at IEEE International conferences and serves on the Editorial Board of many national and international refereed journals. He is also a Member of the Bureau of Indian Standards (BIS), Government of India.