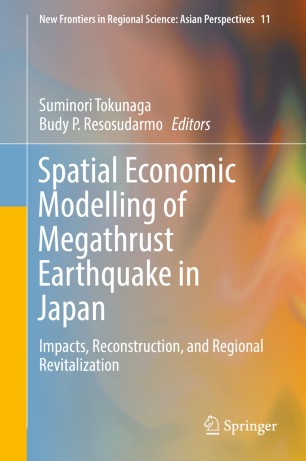 This book presents an evaluation of the impacts of megathrust earthquakes and tsunamis on regional economies and subsequent reconstruction, as well as regional revitalization by the spatial economic model and dynamic macro and regional computable general equilibrium (CGE) models. The cases examined are the Great East Japan Earthquake and the Indian Ocean Tsunami. The study constructs three models of these megathrust earthquakes and the associated tsunami. In the first model, the regional CGE model is proposed with a database comprising the two-regional social accounting matrix for 2005 between the region comprising four disaster-affected prefectures of Japan and the non-disaster region. For the recursive dynamic regional CGE model, the model that expanded and improved the dynamic two-regional CGE model to reflect the incomplete employment conditions and the aging society is used to analyze the impacts of an earthquake and the construction of industrial clusters. In the second model, the interregional input–output model is proposed in order to analyze the impacts of the earthquake and rapid population decline and construction of a biogas electricity power plant. In the third model, a new economic geography (NEG) model is proposed, consisting of the 47 prefectures of Japan in order to investigate the impacts of the Great East Japan and Nankai megathrust earthquakes and the associated tsunami and to consider how they change the regional economies of Japan. Using these three models, the impacts of megathrust earthquakes and tsunamis on regional economies and reconstruction and on regional revitalization are evaluated.