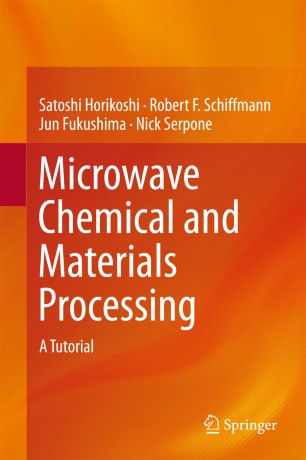 Microwave heating has become a popular methodology in introducing thermal energy in chemical reactions and material processing in laboratory-scale experiments. Several research cases where microwave heating has been used in a wide range of fields have been reported, including organic synthesis, polymers, nanomaterials, biomaterials, and ceramic sintering, among others. In most cases, microwave equipment is used as a simple heat source. Therefore the principal benefits of microwave radiation have seldom been taken advantage of. One reason is the necessity to understand the nature of electromagnetism, microwave engineering, and thermodynamics. However, it is difficult for a chemist to appreciate these in a short time, so they act as barriers for the chemist who might take an interest in the use of microwave radiation. This book helps to overcome these barriers by using figures and diagrams instead of equations as much as possible.

Faculty of Science and Technology, Department of Materials and Life Sciences, Sophia University

Satoshi Horikoshi received his PhD degree in 1999, and was subsequently a postdoctoral researcher at the Frontier Research Center for the Global Environment Science (Ministry of Education, Culture, Sports, Science and Technology) until 2006. He joined Sophia University as Assistant Professor in 2006, and then moved to Tokyo University of Science as Associate Professor in 2008, after which he returned to Sophia University as Associate Professor in 2011. Currently he is Vice-President of the Japan Society of Electromagnetic Wave Energy Applications (JEMEA), and is on the Editorial Advisory Board of the Journal of Microwave Power and Electromagnetic Energy and other international journals. His research interests involve new material synthesis, molecular biology, formation of sustainable energy, environmental protection and CO2-fixation using microwave- and/or photo-energy. He has co-authored over 170 scientific publications and has contributed to and edited or co-edited 20 books.

Bob Schiffmann has been conducting R&D with microwave heating since 1961. He has been an independent consultant since 1971, and, since 1982, has focused exclusively on microwave-heating projects. His work includes applications research in microwave ovens, microwave foods & packaging, industrial microwave systems, medical applications, and more. He has been the president of the International Microwave Power Institute (IMPI) for 16 years; is a Founding Member of AMPERE (the European microwave society); is an Honorary Member of the Microwave Technology Association of the UK, and for five years was a Scientific Lecturer on microwave topics for the Institute of Food Technologists, and is a Certified Food Scientist. He is the first recipient of the Metaxas Microwave Pioneer Award. He has taught numerous international microwave science & technology courses since 1973 and chaired over 20 international microwave conferences. He has 28 US patents, over 50 publications related to microwave science & technology. He has served as an expert & expert witness in 35 microwave-related cases. He is a visiting professor at the Kunming University of Science & Technology in China, and received his MS in Physical & Analytical Chemistry from Purdue University.

Nick Serpone is Professor Emeritus (Concordia University, Montreal, Canada) and since 2002 has been a Visiting Professor at the University of Pavia (Italy). He was also a Visiting Professor at the Universities of Bologna and Ferrara (Italy), Ecole Polytechnique Federale de Lausanne (Switzerland), Ecole Centrale de Lyon (France), Tokyo University of Science (Japan), and Guest Lecturer at the University of Milan (Italy). He was program Director at the National Science Foundation (Washington, USA) and consultant to the 3M Company (USA). He has co-edited/co-authored 9 books, contributed 23 chapters to books, and published over 450 articles. His principal interests have focused on the photophysics and photochemistry of metal-oxide semiconductors, environmental remediation, and microwave chemistry. He is a Fellow of the European Academy of Sciences (EurASc) and Head of the Materials Science Division of EurASc.

Jun Fukushima received his PhD degree in 2012, and was subsequently an assistant professor at Tohoku University (Dept. of Applied Chemistry). His research interests involve novel solid-state materials synthesis, texture control and diffusion control by microwave processing, and physics of microwave effects. He has co-authored over 50 scientific publications and books.