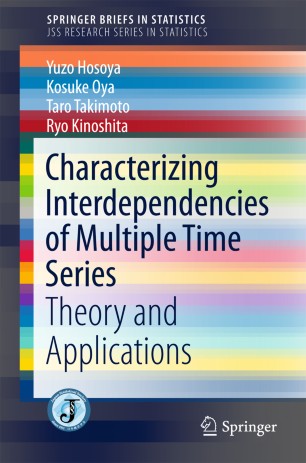 This book introduces academic researchers and professionals to the basic concepts and methods for characterizing interdependencies of multiple time series in the frequency domain. Detecting causal directions between a pair of time series and the extent of their effects, as well as testing the non existence of a feedback relation between them, have constituted major focal points in multiple time series analysis since Granger introduced the celebrated definition of causality in view of prediction improvement.

Causality analysis has since been widely applied in many disciplines. Although most analyses are conducted from the perspective of the time domain, a frequency domain method introduced in this book sheds new light on another aspect that disentangles the interdependencies between multiple time series in terms of long-term or short-term effects, quantitatively characterizing them. The frequency domain method includes the Granger noncausality test as a special case.

Chapters 2 and 3 of the book introduce an improved version of the basic concepts for measuring the one-way effect, reciprocity, and association of multiple time series, which were originally proposed by Hosoya. Then the statistical inferences of these measures are presented, with a focus on the stationary multivariate autoregressive moving-average processes, which include the estimation and test of causality change. Empirical analyses are provided to illustrate what alternative aspects are detected and how the methods introduced here can be conveniently applied. Most of the materials in Chapters 4 and 5 are based on the authors' latest research work. Subsidiary items are collected in the Appendix.

“This book is concerned with concepts and methods for characterizing interdependencies of multiple time series in the frequency domain. … the authors have written an interesting and high valuable book, with emphasis on the practical analysis of time series. At the end of each chapter, a short list of references is provided and this will help a reader wishing to pursue this area further.” (Apostolos Batsidis, zbMATH 1387.62003, 2018)
“This is very nicely written book on interdependence measures between time series. The exposition is clear and the book is enriched with various examples and applications. Basic knowledge of time-series analysis is assumed. The book should trun out to be very useful for statisticians, econometricians or time-series analysts.” (Alexander M. Lindner, Mathematical Reviews, February, 2019)
Buy options