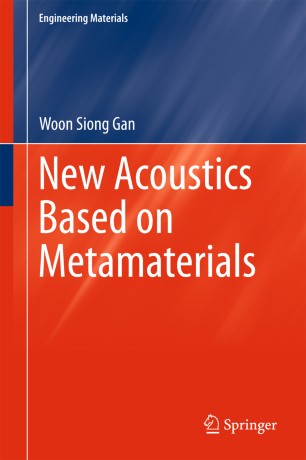 New Acoustics Based on Metamaterials

This book highlights the acoustical metamaterials’ capability to manipulate the direction of sound propagation in solids which in turn control the scattering, diffraction and refraction, the three basic mechanisms of sound propagation in solids. This gives rise to several novel theories and applications and hence the name new acoustics. As an introduction, the book mentions that symmetry of acoustic fields is the theoretical framework of acoustical metamaterials. This is then followed by describing that acoustical metamaterials began with locally resonant sonic materials which ushered in the concept of negative acoustic parameters such as mass density and bulk modulus. This complies with form invariance of the acoustic equation of motion which again exemplifies the symmetry property of acoustic fields.


Dr. Woon Siong Gan obtained his BSc in physics in 1965, DIC in acoustics & vibration science in May 1967 and PhD in acoustics in Feb 1969, all from the Physics department of the Imperial College London. He was associate professor in the physics department of the Nanyang University, Singapore from 1970 to 1979. From 1979 to 1989, he was a practicing acoustical consultant. In 1989, he founded Acoustical Technologies Singapore Pte Ltd, a research & technologies company engaging in ultrasound technologies especially acoustical imaging. The company has developed and patented the scanning acoustic microscope (SAM) and the surface acoustic wave (SAW) devices. He is also the author of the book: Acoustical Imaging: Techniques and Applications for Engineers published by John Wiley & Sons in June 2012.  He is the first to introduce symmetry properties to acoustic fields in 2007.  In 1996 he coined the term transport theory.  Transport theory is today the key foundation of theoretical design of materials.