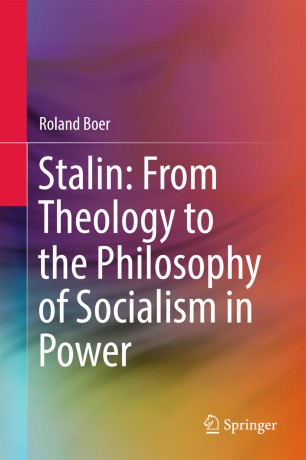 Stalin: From Theology to the Philosophy of Socialism in Power

This book not only explicates Stalin’s thoughts, but thinks with and especially through Stalin. It argues that Stalin often thought at the intersections between theology and Marxist political philosophy – especially regarding key issues of socialism in power. Careful and sustained attention to Stalin’s written texts is the primary approach used. The result is a series of arresting efforts to develop the Marxist tradition in unexpected ways.

Starting from a sympathetic attitude toward socialism in power, this book provides us with an extremely insightful interpretation of Stalin’s philosophy of socialism. It is not only a successful academic effort to re-articulate Stalin’s philosophy, but also a creative effort to understand socialism in power in the context of both the former Soviet Union and contemporary China.

Boer's book, far from both "veneration" and "demonization" of Stalin, throws new light on the classic themes of Marxism and the Communist Movement: language, nation, state, and the stages of constructing post-capitalist society. It is an original book that also pays great attention to the People's Republic of China, arising from the reforms of Deng Xiaoping, and which is valuable to those who, beyond the twentieth century, want to understand the time and the world in which we live.

-------Domenico Losurdo, University of Urbino, Italy, author of Stalin: The History and Critique of a Black Legend.