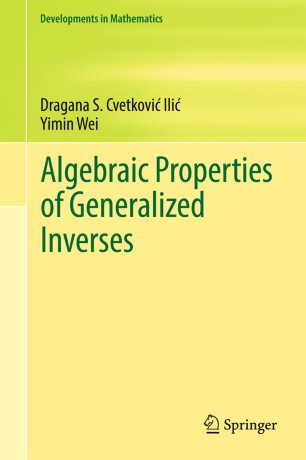 Part of the Developments in Mathematics book series (DEVM, volume 52)

Particular emphasis is placed on the existence of Drazin invertible completions of an upper triangular operator matrix; on the invertibility and different types of generalized invertibility of a linear combination of operators on Hilbert spaces and Banach algebra elements; on the problem of finding representations of the Drazin inverse of a 2x2 block matrix; and on selected additive results and algebraic properties for the Drazin inverse.

In addition to the clarity of its content, the book discusses the relevant open problems for each topic discussed. Comments on the latest references on generalized inverses are also included. Accordingly, the book will be useful for graduate students, PhD students and researchers, but also for a broader readership interested in these topics.

Dragana S. Cvetković‐Ilić is a Professor of Mathematics at the Faculty of Science and Mathematics, University of Nis. She has written in collaboration with other coauthors many articles with a significant contribution to the theory of generalized inverses, linear algebra and operator theory.

Yimin Wei is a Professor at the School of Mathematical Sciences, Fudan University, Shanghai, P.R. of China. He has published four English monographs and over 100 research papers in international journals.

“The presentation is very clear. The proofs are described in detail. Another beautiful feature of this book is that each chapter ends with references. … Graduate students, Ph.D. students and researchers working on the theory of generalized inverses or closely related fields will benefit from this book.” (Debasisha Mishra, Mathematical Reviews, May, 2018)

“This book gives a presentation of some current topics in theory of generalized inverses. … This book is well written and quite useful for the matrix theory. This reviewer will recommend it as the textbook for the under-graduate, graduate students and PhD students but also for all the researchers interested in this topic.” (Nestor Thome, zbMATH 1380.15003, 2018)
Buy options