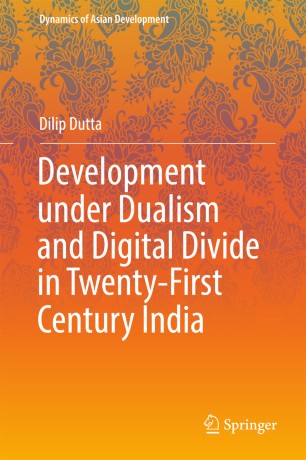 Development under Dualism and Digital Divide in Twenty-First Century India

After first analysing the economic development processes of emerging Asian economies in general, this book explores the development implications of India’s seventy years (1947-2017) of socio-economic policy regimes. It discusses structural dualism and the digital divide, which it identifies as the major socio-economic structural elements of the Indian economy, along with the external forces of globalisation. Since the adoption of comprehensive economic reforms in 1991, India has been liberalising its economy, due in part to the rising pressures of globalisation. However, critics have argued that Indian liberalisation policy has aggravated unemployment, regional inequality and poverty, and also increased India’s external vulnerability.
This book tests the validity of these arguments, and provides readers a deeper understanding of the structural and institutional elements of the articulation of Indian society. It also examines the paradoxical political and economic effects of the information and communication (ICT) industry in India, due to the economic disparities between the beneficiaries of the ICT windfall and those unable to reap those benefits. Lastly, by investigating the integration of key traditional sectors into modern sectors, the book provides policy suggestions for tackling the sectoral and segmental disarticulation that currently characterises Indian society.

Dilip Dutta is an Associate Professor of Economics at the University of Sydney, and Director of the University’s South Asian Studies Group. His current research interests include socio-economic dualism, trade liberalisation, endogenous growth, and the impact of information and communication technology (ICT) and services on economic growth and development in selected developing countries, including China and India. He is the founding editor of the International Journal of Development Issues (Emerald, UK).